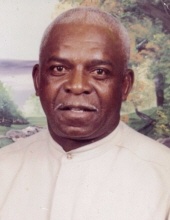 Willie James "Blue" Moore, 77, a resident of Moss Point passed away on June 17, 2019. Willie James Moore, 77, a resident of Moss Point, Mississippi, was called home to be with the Lord on June 17, 2019, due to natural causes. Willie James was born on August 3, 1941, in Belen, MS, the only child of D.C. and Inez Burgess Moore. Willie James, his wife Mary, and 6 children traveled to Moss Point, MS in 1970 once recruited by Ingalls Ship Building in Pascagoula. Willie James spent his working career at Ingalls Ship Building as a Pipe Welder to then become a Foreman of his department. Back then, it was uncommon for black pipe welders to be called upon for difficult welds. Willie James was one of the first in the Pascagoula area to be called upon for Mirror Welding, which today has become a common welding procedure. After retiring in 1988, Willie James started a new journey over the next 8 years to meet and marry in 1996, the love of his life Gwendolyn Sherrod and gained a stepson Jerome Sherrod. They also added a daughter, Ashley Moore to the family in 1995. He started Moore’s Lawn Care, “No Job Too Small We Do It All,” one of the first black-owned lawn services in the Moss Point area to branch out along the Gulf Coast. Willie James gave employment opportunities to many over his 20-year tenure in lawn care. Willie James, “Blue,” as he was affectionately called, never met a stranger and was loved by many. His favorite sayings were: “Blue, Blue, Blue,” “What’s Up Blue,” “Blue Man Chew,” and “Don’t Hurt Me Blue.” Willie James was a giving man. No matter the need, no matter the cost, he would give his last to help anyone. Everywhere he went he knew somebody. Periodically, he traveled to Clarksdale, MS, Chicago IL, and Jacksonville, FL to visit family and lifelong friends. When Willie James came to town everybody knew. People were drawn to his loud and funny ways. Willie James cherished his relationships with his family, and friends dearly. He also loved his church, Christian Love, he loved the brotherhood, and he absolutely loved Bishop D.A. Graham. Willie James was preceded in death by his parents, D.C. and Inez Burgess Moore; sons: Joseph Moore and Dennis Charles Moore. He leaves to mourn his loss his wife, Gwendolyn Moore; children: Willie Lee Smith, Curtis Lee Moore, Betty Joe Porter, Levance Moore, Shirfay Moore, Shealee Moore, Tri Lynn Moore, Jerome Sherrod, and Ashley Nicole Moore; forty-seven grandchildren and fifty-two great-grandchildren and a host of other relatives and friends. Funeral services have been entrusted to Richmond-August Funeral Home.
To order memorial trees or send flowers to the family in memory of Willie James Moore, please visit our flower store.
Send a Sympathy Card
Send a Sympathy Gift