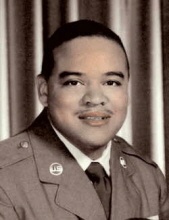 William Victor Major, age 76, passed away peacefully on Sunday, June 3, 2012 at US Air Force Medical Center Keesler, Keesler AFB, Biloxi, MS. Bill, aka �The Bull�, was born January 29, 1936, in Columbus, OH to William Oliver and Edith Frazier-Major. He was a 1954 graduate of Licking Heights High School, formerly Summit Station High School in Pataskala, OH. He was married to Josephine Louise Elmore, his childhood sweetheart. Their union was blessed with two sons, Victor and Doran. During his high school years, Bill was an outstanding athlete. He played quarterback on the Summit Station High School football team. He worked with his father in the family Sanitation business. After graduation from High School, Bill joined the US Air Force, and served our country for 25 years. He retired with a rank of Senior Master Sergeant. Bill was a singer and songwriter. He was a loving and devoted husband, father, grandfather, brother, and friend. He will be sadly missed by all who knew him. He was preceded in death by his father and mother, William and Edith Major; and his wife, Josephine Elmore-Major. He is survived by his sons, Victor(Yvette) Major, Chicago, IL; Doran(Davinder) Major, Toronto, Canada; brother, Robert(Grace) Major, Columbus, OH; sisters, Marlene(John) Pagett, Coshocton, OH, Eleanor(Joseph) Johnson, Lewis Center, OH, Mary(Michael) Jack, New York, NY, brother and sister-in-law, Joe & Jean Elmore, Columbus, OH, beloved grandchildren, nieces, nephews, and other family members and friends. The family has entrusted the care of their loved one to the professional staff of RICHMOND-AUGUST FUNERAL HOME.
To order memorial trees or send flowers to the family in memory of William Victor Major, please visit our flower store.