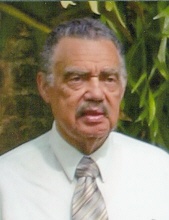 “The strength of a man is in his character. The strong man is a great man of wisdom who understands his top priority is to his family.” Ellen J. Barrier On July 6, 2018 p.m. at approximately 11:00 p.m. our beloved, Mr. William Floyd Dockett departed this life at the Veterans Administration Medical Center in Biloxi, Mississippi. William Dockett was born on September 10, 1936, in Thomasville, Georgia. He was the second of five children born to the union of the late Mr. Alfred Benjamin Dockett and Mrs. Rosebud Floyd Dockett who were both prominent pharmacists in the Thomasville community. Mr. Dockett began his formal education at the Good Shepherd Episcopal School. He later graduated from Douglas High School in Thomasville, Georgia. As a young man, he became a member of the Boy Scouts of America while in Thomasville. He and his older brother, Alfred, distinguished themselves by becoming the first two African American Eagle Scouts in the state of Georgia. Mr. Dockett enrolled at The Xavier University of Louisiana in 1956. He completed one year of his university training and subsequently enlisted in the United States Air Force. After being honorably discharged he returned to Xavier University where he completed his Bachelor of Science Degree in Medical Technology. While in New Orleans he met and married Marilyn Molezion. To this union one son, William Floyd Dockett, II was born. After graduating from The Xavier University of Louisiana, Mr. Dockett completed an internship with the Veterans Administration, and he was subsequently offered a position as a medical technologist. He accepted an initial posting in Fayetteville, Arkansas. During his career with the Veterans Administration, he had seven different postings throughout the United States. Mr. Dockett eventually became the director of the laboratory at the V.A. Hospital. His final posting was in Biloxi, Mississippi where he retired in September of 1999. One of Mr. Dockett’s final duties prior to retiring was the redesigning of the Biloxi National Cemetery. Mr. Dockett accepted Christ at an early age and was a member of Good Shepherd Episcopal Church in Thomasville, Georgia. Upon moving to Gulfport, Mississippi, he joined Our Lady of Fatima Catholic Church where he was a faithful member until his health declined. William Dockett was a strong man of wisdom and a devoted husband and father. He loved Christ, his family, and his country. He leaves to cherish his memory his wife of 54 years, Mrs. Marilyn Molezion Dockett; his son William Floyd Dockett, II; his daughter-in-law, Dr. Suyah Loud-Dockett; his brother, Robert Dockett; his sister, Marion Dockett; seven sisters-in-law, Morrisce Dockett, Claudia Dockett, Ethel Chapital, Sandra Bozant, Linda Molezion, Brenda Brossett, Ruby Molezion; two brothers-in-law, Augustine Bozant and Arlen Molezion, along with several nieces, nephews, cousins, and cherished friends. William Dockett was preceded in death by his loving parents, Alfred and Rosebud Dockett; his brothers Alfred Dockett, II and Simon Dockett; and two brothers-in-law, Roi Molezion and Rommel Chapital. In lieu of flowers, the family requests that donations be made in memory of Mr. William Floyd Dockett to The Xavier University of Louisiana by contacting Ms. Vondra Richardson at (504) 520-7575, the United Negro College Fund at www.uncf.org, and the Alzheimer’s Association at Alz.org/ms/donate.
To order memorial trees or send flowers to the family in memory of William Floyd Dockett, please visit our flower store.
Send a Sympathy Card
Send a Sympathy Gift

The family will receive friends at 12:30 PM at Our Lady of Fatima Catholic Church.