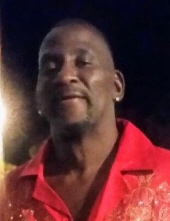 God in his infinite wisdom and divine providence called His beloved son, Wilbert Sidney, home on Thursday, June 14, 2018. Mr. Wilbert “Sid” Sidney was born March 26, 1954, in Meridian, MS. Wilbert was a hardworking and dedicated employee of Huntington Ingalls Industries, where he retired as a Chipper. Prior to returning to Ingalls, he dedicated many years to Biloxi Housing Authority. He was a member of First Missionary Baptist Church of Biloxi, where he served on the Usher Board. Some of his hobbies included fishing and cooking for his family and friends. He had a great love for people and was very involved in the lives of his family and friends. He was a loving and devoted husband to his wife of 21 years (married 9 years). Wilbert was truly a legend in his day and the salt of the earth. He will forever be remembered by so many as a strong man with a heart of gold, his style of dress and his love for the color “Red”. He was preceded in death by his mother, Birdie Lee Sidney; brothers, Willie Earl McGlothin, Jesse Sidney, Thomas “Vamp” McGlothin and a sister Thelma Sidney. Wilbert leaves to cherish his loving memories that will forever linger in our hearts: his devoted wife, Valerie Butler Sidney; one son, Santoria Marquez Sidney; a stepson, Marquael Butler and a stepdaughter, Kyra Butler all of Biloxi, MS; his brothers, Robert Earl (Ruth) Mc Glothin of Cleveland, OH, Albert Charles (Delores) Sidney of Jackson, MS, Eddie James (Katie) Sidney of Meridian, MS and Albert (Rose) Sidney of Pensacola, FL ; his sisters Lessie Sidney, Ida (Audwin) Roberts and Marilyn Townsend, all of Meridian, MS; one Special Aunt, Mrs. Jessie Hardaway; three grandchildren; a godson, Robert Antonio Edwards of St. Martin, MS; and a host of nieces, nephews, relatives and friends. Services will be held at 11:00 am, Thursday, June 21, 2018 at First Missionary Baptist Church, Biloxi with visitation one hour before. The family of Mr. Wilbert Sidney has entrusted his care to the professional service of Richmond August Funeral Home. Inquires: 228-436-6722.
To order memorial trees or send flowers to the family in memory of Wilbert Sidney, please visit our flower store.
Send a Sympathy Card