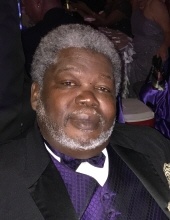 Mr. Walter Lewis Cook, a beloved husband, father and friend passed away Thursday, February 15, 2018. The legacy of Walter Lewis Cook is so amazing, profound, remarkable, astounding, and just outright beautiful that it can only be told in love and received in love because he was conceived…in love. Walter was born on January 25, 1952 to Norman and Sirvither Cook of Biloxi, MS. Walter attended A. E. Perkins Elementary School, Nichols Junior High School, and graduated from Nichols Senior High School in 1969. There is a little known fact regarding a certain childhood pet by the name of Fuzzy Cook. You see, Fuzzy wasn’t your ordinary pet. Fuzzy was actually a squirrel. He was loved by the entire family including his mother Sirvither. Per the story, Fuzzy and Walter would watch TV together. It was not out of the ordinary to see Walter and Clay walking to the park to play football and Fuzzy would be walking right behind them. When you saw Walter, you saw Fuzzy. Alcorn State University was Walter’s college of choice. There, he received a Bachelor of Science Degree in Mathematics in 1974. He was also an influential member of the Sounds of Dynomite Band, formerly known as the Band of Distinction, where he played the Tenor Saxophone. He was heralded as being the voice of the band and known for taking action. They say when the band needed money, Walter was the one to get it done. One day, while attending Alcorn, Walter was talking outside of his dorm with a few friends and a certain young woman caught his eye so he continued to watch her from a distance. He planned his pursuit to make her his own and that’s exactly what he did. This young woman happened to be Gayle Robinson. Their courtship flourished, and they were married on October 21, 1978. Their love began to grow and, as God would have it, two daughters were added to their bubble of love: Sirvirther and Bianca. Walter spent his entire working career, 35 years to be exact, at Mississippi Power working as a Results Specialist until he retired in 2010. His knowledge and expertise in his field were second to none. As a matter of fact, he was the only Results Specialist at the plant. He took great joy in teaching others what he learned and was able to accomplish this by taking a co-operative under his wing each year. They would learn the ways of Southern Company and somehow they also “learned” their way to a seat at the dinner table of the Cook household. New Bethel Baptist Church was home to the Cook family for generations. Walter served faithfully for many years using his hands wherever they were needed. He was a Trustee and Chairman of the finance office. In recent years, he began serving on the Good Samaritan Committee alongside his beloved wife. Recently, Walter began to use his musical gift in the church doing what he loved. He played the saxophone for various programs hoping to be a great blessing to many. Walter was very active in the community. He was a member of Henry Beck Lodge #307, Holy Royal Arch Biloxi #39, King Solomon Consistory #142 33rd Degree, Karun Temple #48 A.E.A.O.N.M.S., and Lighthouse Chapter #953 O.E.S. He also served alongside the members of the NAACP. As previously stated, Walter was no stranger to doing whatever it takes to acquire funding for various community projects and could be found behind the grill, or fryer, of many fund raising events in Biloxi. Walter was known for his great hospitality, friendship, playing his horn, cooking for others, his love for people, and most of all his love for his family. It was important to him to see others happy, and he would do all he could to make that possible. Walter was preceded in death by his parents, Norman and Sirvither Cook; his sister, Bernice Johnson; and his brothers, Ralph Burney and Norman Cook., Jr. Walter is survived by his wife, Gayle Cook; two daughters, Sirvirther Cook and Bianca (Abra) Taylor; four grandchildren, Javian Foules, Abra Taylor, Jr., Kayden Taylor, and Aubree Taylor; his brothers, Dr. Charles (Shirley) Cook, and Richard Hill; one sister, Angela Smallman; his childhood best friend and nephew, Meranzo Clay (Rosalyn) Johnson; and a host of other relatives and friends. Services will be held Friday, February 23, 2018 at New Bethel Missionary Baptist Church at 11:00 am; with visitation two hours before. Arrangements have been entrusted to Richmond-August Funeral Home. Inquires: 228-436-6722
To order memorial trees or send flowers to the family in memory of Walter Lewis Cook, please visit our flower store.