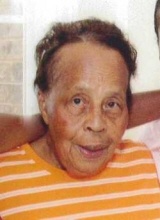 Victoria Elizabeth Webb Beck was born in Osaka, MS, September 11, 1916, to the late Walter and Lucille Webb. She passed on March 15, 2015. She was preceded in death by her parents, her siblings Philip, Walter, and Vera, and her husband, John Henry Beck. Although she was born in Osaka, she spent her childhood in Pass Christian and graduated from Randolph High School. She received a B.S. from Tougaloo College. Upon her return to the Coast, she made her home in Biloxi and started her teaching career in Jackson County. She later was employed with the Biloxi Public Schools at M.F. Nichols High School, where she happily remained until retirement. Although teaching was her true calling, her four children, Lawrence, Gwendolyn, Philip, and Shyril were her life. She left a piece of her heart to her ten grandchildren and six great grandchildren. She leaves a host of nephews, nieces and their families, and a community of friends and neighbors to mourn her passing. Funeral services will be held on Friday, March 20, 2015 at First Missionary Baptist Church, 658 Esters Boulevard. Viewing will begin at 10:00 a.m. with the service immediately following at 11:00 a.m. RICHMOND-AUGUST FUNERAL HOME has been entrusted with the care of Mrs. Victoria Webb Beck. RICHMOND-AUGUST FUNERAL HOME has been entrusted with the care of Mrs. Victoria Webb-Beck.
To order memorial trees or send flowers to the family in memory of Victoria Webb Beck, please visit our flower store.
Send a Sympathy Card
Send a Sympathy Gift