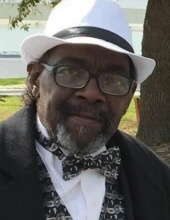 To view the LiveStream of Mr. Richard Thurmon please click the link below: https://www.hdezwebcast.com/show/richard-o-thurmon Richard Odell “The Thurm” Thurmon of Ocean Springs, MS departed this earthly life on Saturday, July 24, 2021. He was born on March 6, 1953, in Ocean Springs, MS to the late Lucy E. Payton. He was a lifelong, faithful member of Macedonia Missionary Baptist Church where he served in any way in which he was asked. Richard attended Elizabeth H. Keys and Ocean Springs High School where he graduated in 1972. He went on to further his education by attending MGCCC Perkinston Campus where he played football. After completing two years at MGCCC, he enrolled at Alcorn State University, the home of the Braves. He received a Bachelor’s Degree in Health and Physical Education in 1978. After graduating, he gained employment at Our Lady of Victory (OLV) where he taught and coached for two years. He, later, gained employment at Ingalls Shipbuilding until he retired in 2015. He had given over 35 years of hard work, leadership, and dedication to the company. Richard loved his family and friends. He enjoyed fishing, yard sales, collecting tea sets, baking cakes, dancing to blues music, barbecuing, wearing fashionable, colorful suits and shoes, passing out candy to the children at church (the kids called him “Candy Man”), and Mardi Gras fun with Krewe Unique. He was a coach, referee, and umpire with the city of Ocean Springs for a number of years. He played for the Aborigines Softball Team as an adult. Richard was well known in the community. His door was always open and welcoming to all who passed by. He served many people in Ocean Springs with his good ol’ barbecue. He was also an organizer and participant in the yearly Dr. Martin Luther King, Jr. Wild Game Festival. In 2019, he was given the honor of being inducted into the Ocean Springs Greyhounds Sports Hall of Fame. Richard had a love for many sports, but he loved football. lt was known that he was a diehard Pittsburgh Steelers fan. Nobody could talk bad about that “Steel Curtain.” Richard also was a true Alcornite through and through. He would say Alcorn is the place “where the grass is greener, the air is cleaner and the water is just a little bit sweeter.’ Brave Nation will truly miss a great man who wore the purple and gold proudly. Richard was preceded in death by his parents, Herman Sr. and Lucy E. Payton; sister, Esther Lee Thurmon; brothers, Sammie Lee Thurmon and Darius F. Thurmon; and niece, Latasha Payton. He leaves to cherish his memories, his caring wife, Karen Thurmon; sons, Richard W. Thurmon, Shannon Sabino, Christian Sabino, and Darius Gines; daughters, Ashley Thurmon, April Sabino, Kiara Jenkins, and Nicole Galloway; grandchildren, Devin Jones, Jaren Sabino, Kameryn Sabino, Shailyn Sabino, Londen Jenkins, Autumn Taylor, Isaiah Hicks, and Kingston Hicks; great-grandchildren, Caleb Jones, Ayden King Ruiz, and Elijah Flores; siblings, Patricia McCormick (Richard’s twin sister), Sharon Payton, Alderine Payton, Herman (Dorothy) Payton, Jr., Michael Dean Payton, Esther Faye Payton, Zachary Payton, Shawn (Valinda) Payton and Alicia (Bertram) Benson; his aunt, Helen Brown; his uncle, Samuel Thurmon and so many in-laws, nieces, nephews, cousins, alumni, colleagues, friends, and loved ones. Funeral services will be held on Saturday, July 31, 2021, at 11:00 am at Macedonia Baptist Church. Visitation will start at 10:00 am. Infinity Funeral Home is honored to serve the family of Richard Thurmon. For inquiries, please call 228-436-6722.
To order memorial trees or send flowers to the family in memory of Richard O. Thurmon, please visit our flower store.
Send a Sympathy Card