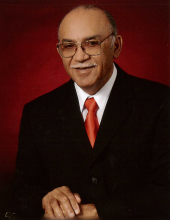 Reverend Kenneth Haynes, Sr. was born October 11, 1930, in Amite County, Mississippi to Johnny Haynes and Ethel Wilson. He attended school in Amite and Pike Counties. In 1958, he entered the ministry. He enrolled in Harper Baptist College where he received a Diploma in Christian Education and a Doctorate of Divinity. Later, he enrolled in Mississippi Baptist College Extension and received a Bachelor’s degree in Theology. In 1996, he received a Master’s Degree in Theology from Lift Bible College. Dr. Kenneth Haynes, Sr., is an Alumni of the Christian Training Center of Los Angeles, CA, where Dr. E.V. Hill was the president. He is also an Alumnus of the Family Life Conference and Campus Crusader for Christ International Extension. He holds many awards from various workshops and conferences. He has conducted many soul-winning seminars, marriage conferences, and prayer workshops. After he was called and answered his calling in the ministry, his first calling to pastor a little church outside of McComb, Little Rock Baptist Church. A few months later, he was called to another church in McComb, St. Paul Missionary Baptist Church. So, between the two churches, he pastored approximately three or maybe four years. Main Street Missionary Baptist Church became vacant, and Pastor Haynes was in a revival in Foxworth, MS and one of the members from the church was there and invited him to come down to Biloxi, MS just to preach for them on a particular Sunday. Since 1962, he has been the pastor of several churches. In 1963, he pastored Main Street Missionary Baptist Church through December 1974. Pastor Haynes also pastored Progressive Missionary Baptist Church of Gulfport, MS. The Lord sent him to L.A. to a full-time church. From 1975 to 1989, he pastored Friendly Friendship Missionary Baptist Church in Los Angeles, California. In 1989, he returned to Main Street Missionary Church, where he continued to pastoring, in Biloxi, MS. Pastor Haynes is a visionary who works extremely hard for Kingdom Building. He is a faithful preacher and a devoted pastor who has “Labored Well”. He is worthy of double honor because he has labored in the word and doctrine. In 1992, Pastor Haynes was given a mission to begin a movement called “The Jericho March” in Biloxi. He has been faithfully leading this march every summer for the past 14 years. In 2005, God put Pastor Haynes in the forefront of Hurricane Katrina Relief. After opening the doors of his church as a shelter and praying and praising out the storm with his people, he made what was left of his church a distribution center, soup kitchen, and homeless shelter for anyone and everyone who came. Among his accolades, Pastor Haynes has received an award from Mrs. Ethel Bradley (Mayor Tom Bradley’s wife) for outstanding services in advancement of Human Relations for the city of Los Angeles. In 2006, the Mayor of Biloxi, Mr. A.J. Holloway, awarded him with a proclamation honoring Pastor Hayne for his service and impact in Biloxi and also declaring the weekend of October 14-15, 2006, “Dr. Kenneth Haynes, Sr. Weekend.” In His Word . . . . . “I am grateful to the Lord for including me on His agenda! I thank Him for His confidence in me and trusting me with His Word.” Some of you may know me already. Some may have merely heard about me. Yet, others may ask the question . . . Who is Rev. Kenneth Haynes, Sr.? Yes, I am the proud Pastor of the Main Street Missionary Baptist Church of Biloxi, MS. I was called to the ministry at an early age. I have made many accomplishments and received many accolades from other ministries. I am a Drum Major and a Leader in the community. The Holy Spirit reveals that I am a “Giant” in the ministry and a “Warrior” for the Lord.” Our Beloved Pastor, Dr. Kenneth Haynes, Sr., an ordained, Ecclesiastical Baptist Preacher, for more than 60 years has labored tirelessly on this awesome journey. I Thessalonians 2:9, reminds us: “For ye remember, brethren, our labour and travail: for labouring night and day, because we would not be chargeable unto any of you, we preached unto you the gospel of God.’ Rev. Dr. Haynes leaves to cherish his memories, his beloved and devoted wife, Mrs. Bobbie Haynes; his children; grandchildren; great-grandchildren; and a host of other relatives and friends. The care of Rev. Dr. Kenneth Haynes, Sr. has been entrusted to RICHMOND-AUGUST FUNERAL HOME. Inquiries: 228-436-6722.
To order memorial trees or send flowers to the family in memory of Rev. Dr. Kenneth Haynes, Sr., please visit our flower store.
Send a Sympathy Card
Send a Sympathy Gift