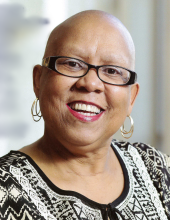 Reatha Gemiace Hall Johnson was born on July 26, 1960 in Gulfport, Mississippi to the late John Hall Jr. and the late Willie B. Hall. She transitioned to her new home on April 19, 2018 at her residence surrounded by her family and friends. She received her education in the Harrison County School District. She is a graduate of Harrison Central High School. On March 28, 1981, Reatha united in holy matrimony with Donnie Johnson. They later became the proud parents of one child, Donnie Noah. As part of her experience as a military wife, she was afforded the opportunity to live in various states. Upon her husband’s retirement, they decided to settle down in Gulfport. In recent years, she gained employment as a caregiver until her health no longer allowed her to work. She is a member of Washington Chapel C.M.E. Church where she served faithfully and tirelessly. She served in the following capacities: President of the Inspirational Choir, Stewardess, Recording Steward, Class Leader, Quarterly Conference Secretary, Sunday School Secretary and served on various program committees. She was an avid fundraiser who continuously encouraged others to give. She was passionate about laboring in the ministry and often times she encouraged others to do the same. She was preceded in death by her parents, John and Willie B. Hall; sisters, Penelope Wilson and Sally Hall; brothers, John Leslie Hall and Wayne Franklin. She leaves to cherish her memories and carry on her legacy: husband, Donnie Johnson; son, Donnie Noah Johnson of Gulfport, MS.; grandson who brought so much joy into her life, Channing Kyrie Johnson of Gulfport, MS; eight sisters, Sylvia (Murle) Walker, Janice Martin, Alice (Ray) Williams, Lesha (Jacob) Evans, Veronicila Roberts, Conswala Smith, Tetisha (Patrick) Smith and Krondenersa Smith all of Gulfport, MS; six brothers, Jerry (Ann) Hall, James McGraw (Sandra) Hall, John (Nora) Franklin, Thomas (Angie) Franklin, Oscar Lee Castill and Jeffery (Darra) Mitchell all of Gulfport, MS; special friends, Beverly Lott, Tameko Clayton and Sonya McInnis, and a host of nieces, nephews, relatives and friends. The care of Mrs. Reatha G. Johnson has been trusted to RICHMOND-AUGUST FUNERAL HOME. Inquiries: 228-436-6722.
To order memorial trees or send flowers to the family in memory of Reatha Gemaice Johnson, please visit our flower store.
Send a Sympathy Card