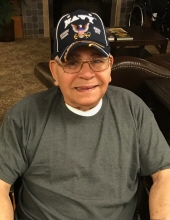 Raymond Lucian Ricard Jr was born July 12, 1934, in New Orleans LA. the oldest of two sons to the Late Raymond Ricard Sr. and Mary Ricard Williams, Raymond spent his early years as a boy growing up in New Orleans, and later they moved to Biloxi. In 1951 Raymond joined the Army and served for 3 years, after that time he decided to join his brother Louis who was in the Navy, and also joined the Navy, after his tour with the Navy he decided to travel throughout the United States over the road driving for various companies with the call name on the C.B radio” little britches”. And if you’re here today from out of town I’m sure he stopped by to visit you, for over 40 years he was on the road in that big rig from state to state, he loved to visit family and friends, and would keep a smile on your face, by always having something funny and smart to say, he was very frank with everyone, he never met a stranger, he enjoyed riding his motorcycle, playing cards, and watching TV which stayed on one channel “western”. Raymond became a member of New Bethel, and served on the usher board, Raymond is proceeded in death by his Mother Mary R. Williams and brother Louis Z Ricard. He leaves behind to mourn his 4 children: June Faye Ricard, of Gulfport MS, Kathryn Crane Ricard, of Washington DC, Raymond Lucian Ricard III (Anna) of Long Beach CA, and Jerome Crumpton (Shemika) of Birmingham Al, 11, Grandchildren,19 Great Grandchildren, and 1 Great Great-grandson. a Host of nieces, nephews in-laws that were so close and loved him dearly.
To order memorial trees or send flowers to the family in memory of Raymond L. Ricard, Jr., please visit our flower store.
Send a Sympathy Card