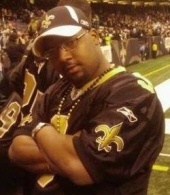 Ragode Jamile Combs, 32, a resident of Gulfport, MS, passed away, August 19, 2014, at his home from natural causes. Ragode was baptized in Jesus name in 1994 and received the Holy Ghost soon after. He served in various ministries while living in Pensacola, FL. After relocating to Gulfport, MS he joined Greater Grace Apostolic Assembly under the leadership of Bishop Ricky J. August where he served faithfully in different capacities including cooking at the City of Refuge, Outreach, and Security. He loved working with the youth department in various sports capacities. At an early age he began his sports career; although he ran track and played basketball his greatest love was football. Ragode was born in Memphis, TN January 7, 1982, the son of Brenda K. Pugh and James E. Combs Jr. Ragode attended Gulfport High School, received a High School Diploma, and went on to Pearl River Community College. Ragode began working at the age of 16, after leaving college he went on to receive his certification in Heating and Air, where his goal was to one day work with his uncle. Ragode loved tennis shoes, cooking, his family, and music. He could be found cooking his famous BBQ ribs and steaks. Many of his cooking skills he learned from his mom. Ragode J. Combs will be remembered for his quiet strength, giving heart and steadfast determination to accomplish his goals. Ragode was preceded in death by his grandparents; William A. Peete, Ruthie M. Malone, and Shirley Combs. Ragode is survived by his parents; John and Brenda Kendrick and James E. Combs Jr. Four brothers; Christopher Peete (Sheneya), James E. Combs III (Porchia), Dominique J. Kendrick, and John J. Kendrick. Two sisters; Ashia K. Kendrick and Jayla Combs. Two devoted great aunts; Jinnie Kemp (Harold) and Dorothy Moore of Memphis, TN. One grandmother; Selma Kendrick of Grenada, MS. He is also survived by a host of uncles, aunts, cousins, nieces, and nephews. Services will be held Saturday, August 23, 2014 at Greater Grace Apostolic Assembly. Visitation from 10:00 - 11:00, with Homegoing Service at 11:00AM. The family of Mr. Ragode J. Combs has entrusted his care to the professional staff of Richmond-August Funeral Home.
To order memorial trees or send flowers to the family in memory of Ragode J. Combs, please visit our flower store.