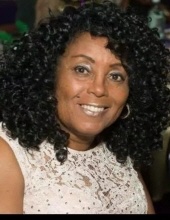 A Time to Be Born Quinnie Ola Kennedy, 66, a resident of Gulfport, MS, passed away, February 9, 2019, at Canon Hospice of Gulfport following a brief illness. She was born in Gulfport, Mississippi, on January 27, 1953, the daughter of Willie Mack Simpson and Delaura Coleman. Following her father's death, she was then raised by her “Dad” Henry Coleman. Quinnie attended North Gulfport Schools. She gave her life to Christ at an early age and was a devoted member of Greater Mount Olive Baptist Church. A Time to Love Quinnie was married to her husband of 49 years, Robert James Kennedy on December 24, 1969. She was a devoted wife, mother, friend and “Nana” to Robert (Deshaun) and Addyson “Addy" A Time to Serve Quinnie spent her working career in various places such as Holiday Inn, Keesler Air Force Base, Swingsters and for the last 20 years until her death at the Veterans Healthcare Administration of Biloxi working in Food and Nutrition Services. She loved her job to the point that even through her illness, she remained dedicated to serve. A Time to Live Quinnie was a woman who exemplified poise and grace. She enjoyed life to the fullest and loved life. No matter what life threw at her, she took it like a grain of salt and kept pressing on life's journey. She was a woman who wore many hats (literally) for she had an extensive hat collection and a very impressive wardrobe. She loved people, her family, and her church. A Time to Mourn Quinnie was preceded in death by her biological father Willie Mack Simpson, Stepfather Henry Coleman, Mother Delaura Coleman, Mother-in-law, Henrietta Kennedy, and a loving step-daughter through marriage Sandra Beverly. Also, important to note were a few of her favorite Aunts Cevonia Jones, Mildred Brown, Bonnie Robinson, Willie Mae Burkett, and Elizabeth Smith “Aunt Liz” as well as one uncle Elijah Magee; her mother's twin brother. She lost one of her closest friends who was like a sister, Dorothy Evans Jefferson. She is going up to heaven where we know she will meet them all again and boy, what a celebration it will be! Left to Sorrow Quinnie is survived by her husband Robert James Kennedy. She and James had three children; two sons: Robert Angus Kennedy and Derrick Jamal Kennedy both of Gulf-port, MS and her only daughter, Ebonie Nicole Kennedy recently relocated from Owings Mills, MD to Gulfport, MS to assist with her care. Through marriage to James, she gained one special son, Wilbur (Joyce) Sims (Meridian, MS); She also has one son-in-law, Fred Davenport (Owings Mills, MD) who she loved as one of her own. She had six sisters: Barbara Berryman (San Antonio, TX), Geneva “Lottie” Corbett, Joanne Dunn, Lucy “Bo” Lyons, Denotra Coleman, and Shannon Coleman all of Gulfport, MS. She also leaves to cherish six brothers: Joseph Magee (Boston, MA), Lonnie (Twonia) Coleman (Memphis, TN), Reverend Benjamin (Mary) Simpson, Sr., Donald Lee (Danette) Coleman, Robert Lee Coleman, and Bruce (Annette) Coleman all of Gulfport, MS. She had three sisters-in-law: Bobbie Lewis (Den-ver, CO), Olivia (Lonnie) Keys, and Judith Hamilton of Gulfport, MS and one brother-in-law, Thomas (Zetta) Kennedy (Phoenix, AZ). Quinnie often expressed how her heart skipped a beat when she was blessed with her two beautiful grandchildren Robert Deshaun Kennedy now 16 and Little Miss Addyson Kennedy Noelle Davenport just 3 years old. Although the fight was often not an easy one, she pressed on each day striving to live to see them grow up. God knew the love she had for children when he blessed her with bonus grandchildren from Sandra; Louis Gardner, Phyllisia Moore and Philip Moore all from Gulfport, MS and from Wilbur; God graced her with Latora Sims, Shaniece (Kevin) Roberts, Drayln Sims, and Wilbur Sims, Jr. all from Meridian, MS. She also leaves to cherish her memory her god-daughter, Miss Ny'Jae Porter, Mrs. Arlena Gardner, her cousin who it was often said was like a “Bonus Mom” and she loved Quinnie as if she was one of her own. In addition, her closest friend of almost 40 years Mary Rogers, her special cousins Catherine Holliman, Michael Manual, Loretta Marks, and Lish Holloway and a host of other cousins, relatives, and friends. Arrangements have been entrusted to Richmond August Funeral Home.
To order memorial trees or send flowers to the family in memory of Quinnie O. Kennedy, please visit our flower store.