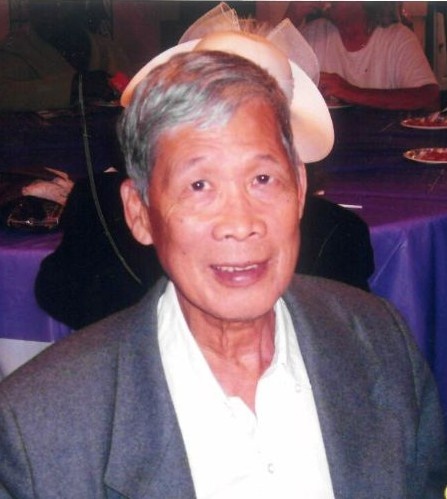 He was born in Vietnam on May 24, 1940. While in his home country he studied to become a Doctor. Quan was a learned man who spoke 7 different languages.

During the Vietnam War, Mr. Nguyen fought alongside the US military.  He was captured and spent seven(7) years in a concentration camp. Years later he was sponsored by a group of Missionaries and came to the US where he gained his citizenship. He lived and worked in Texas until he came to work in Biloxi after Hurricane Katrina with a construction group.  He took ill and the group abandoned him. Kay Horne found him living in the back of an SUV on Division St. After gaining his trust, along with Hollis Hopkins and Jill Leggett, they began to feed him and provide care until he was back on his feet.  Mr. Nguyen and Kay developed a father-daughter kinship.  She called him her child, but he called her his daughter.  This relationship has lasted for 16 years.

Quan X. Nguyen practice Buddhism until he joined New Bethel Missionary Baptist Church on January 9, 2009, under the leadership of Pastor Kenneth E. Hollins. Dr. Nguyen, as he was affectionately called, was faithful to the church and his religion until the end.  He loved his church and his Pastor. Every time the church van cranked up, he was on it to support his Pastor and the church. He considered the members of the church his family and friends.  Dr. Nguyen was a faithful member of the Brotherhood Ministry, Prison Ministry, Sunday School, and Bible Study. Mr. Nguyen even led others to Christ and Christianity. Quan was a sweet spirit who was always showing love to all who knew him.

Infinity Funeral Home is honored to serve the family of Quan Nguyen.  For inquiries, please call 228-436-6722.