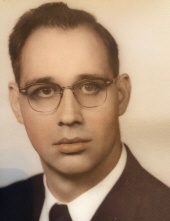 Dr. Paul G. Blacketor passed away in Gulfport, MS on November 25, 2018. He was born in Ensley, AL on February 10, 1927.Paul received a B.S. from Samford University and an M.S., M.A. and Doctorate from Auburn University. He had a career spanning over 50 years as a Minister and College Professor. He served three terms in the New Hampshire House of Representatives. He was a W.W. II veteran and a retired US Army Officer. Paul is survived by a son, Wade Blacketor of Littleton, CO and daughter Paula Blacketor, MD of Lake Oswego, OR. He is also survived by grandchildren Kevin Blacketor, Kaitlin Blacketor, and Nicole Zavoshy as well as by step children Christopher Beattie and Rachel Louko and dear friends Chitra and Darius Wilson. Arrangements have been entrusted to Richmond August Funeral Home.
To order memorial trees or send flowers to the family in memory of Paul G. Blacketor, please visit our flower store.
Send a Sympathy Card
Send a Sympathy Gift