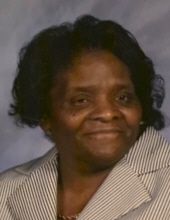 Patricia Ann Golsby Wright, age 69, a resident of Gulfport Mississippi passed away on March 3, 2020, peacefully in her home. She was born in St. Louis, Missouri on January 29, 1951, the daughter of Robert Lee Goldsby and Mother Laura Mae Webb. Patricia and her family moved from St. Louis to Vicksburg, Mississippi where she went to school and eventually received her high school diploma from Vicksburg High School. Patricia eventually moved from Vicksburg to the Mississippi Gulf Coast and settled in Biloxi. Patricia gave her life to Christ and became grounded and rooted at Greater Grace Apostolic Assembly. She was single and satisfied in Jesus. Patricia was effectually known as “Momma Pat” in the church and was loved by all that knew her. She loved and enjoyed cooking and baking her cakes. Patricia’s work ethic spoke volumes as she worked tirelessly to provide for her family. She worked at Motel 6 for 15 years and worked hard from being a housekeeper to later becoming the manager on duty, then transitioned to work for the MGCCC Jefferson Davis campus, from where she had to medically retire in 2013. Patricia was preceded in death by her father, Robert Lee Goldsby and her mother, Laura Mae Webb Goldsby, her grandmother, Willie Mae Turner, her uncle, D’Willie Golsby, Mack Goldsby, Eloise McClendon and Evette Bailey, and her beloved son Christopher Lee Toliver. Patricia Wright is survived by her two brothers, Robert Lee Goldsby, Jr. and James Goldsby; one sister, Doris Goldsby; first cousin, Catherine Wilkerson; four sons, Noland Toliver (Kathy) with their children, Kaitlin, Noelle and Alexander; Dennis Wright (Jackie); Prince Wright (Kayla); Quincy Bailey (Felicia) with their children Deanna, Quinesha, and Evette; and her only daughter, Monica Toliver Lemon (Marc) with their children, Aaliyah and Jasmine and her bonus son, Lawrence Davis. Patricia leaves to cherish her memories, a host of nieces and nephews, sisters-in-law and brothers-in-law. She absolutely loved her family and church family; there was absolutely nothing that she wouldn’t do for them. She loved her pastor, Bishop Rick August, and her first lady, Evangelist Tammi August.
To order memorial trees or send flowers to the family in memory of Patricia A. Wright, please visit our flower store.
Send a Sympathy Card