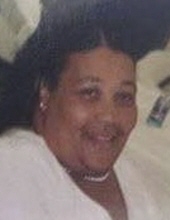 For I am now ready to be offered, and the time of my departure is at hand. I have fought a good fight, I have finished my course, I have kept the faith. II Timothy 4:6-7 Patricia Carter went home to be with her Lord and Savior on July 28, 2018. Patricia was born February 24, 1959, in Chicago, Illinois (Cook County Hospital) to the late Luvern and Mary Pittman. She attended Harrison Central High School class of 1977. A year later, she decided to further her education by attending Job Corp. On January 27, 2004, she was united in holy matrimony to the late Sammie Lee Carter. To this union was born four children. Patricia was an amazing woman that wore many hats. She was a ball player, decorator, cook, wife, mother and a God-fearing woman. In her younger days, she was a great pitcher and hitter on the ball field in Forrest Heights (Turnkey). In addition, she loved to go garage selling with her mother (Mary Pittman), do interior decorating, and watching soap operas. Patricia was a super mom and took pride in raising her children. Though there were struggling times, she provided the best that she could. She made meals appear when food was scarce along with other things and that’s what made her a SUPER MOM. She will always be remembered for her warm laugh and bringing life to every party or family event. She was such a joy to be around and made an impact on everybody that she came in contact with. Patricia crossed into eternity to be with her family that preceded her in death; her parents, Luvern Pittman Sr. and Mary White Pittman; her husband of 14 years, Sammie Lee Carter; her grandparents, John Sullivan White and Millie Blackwell White; brother, Temple Houston Pittman; and niece, Erriel Marie Jones. Those left to cherish her memories include her children, Stacy Luvern Pittman, Nicholas Darnell (Tamika) Pittman, Jacobi Roman Pittman and Cordero DeMontra (Kirsten) Pittman; three sisters, Gloria Pittman of Gulfport, MS, Jackie Pittman of Denver, CO, and Linda Pittman of Gulfport, MS; three brothers, Luvern Pittman Jr, Lynn Pittman, and Tracy Pittman all of Denver, CO; 12 grandchildren; 2 sisters-in-law, Dorothy and Shirley Carter; and a host of nieces, nephews, cousins, family, and friends. Arrangements have been entrusted to Richmond August Funeral Home.
To order memorial trees or send flowers to the family in memory of Patricia Pittman Carter, please visit our flower store.
Send a Sympathy Card