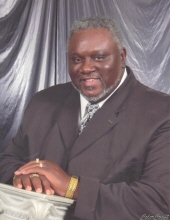 Pastor Ronald Ray Jones, Sr., a beloved husband, father, and man of God transitioned to his heavenly home, finding eternal rest on December 3, 2016. He lived a life of unrelenting faith, while spreading the gospel of Jesus Christ wherever he went. Born in September 5, 1960 in Crystal Springs, MS, to Henry Sr. and Ruthie Mae Jones, Pastor Jones was the baby boy of four children. He attended Gorenflo Elementary, Nichols Jr. High, and Biloxi High School where he was a member of the marching band. He enlisted in the United States Army in 1980 and his duty stations included Germany and Colorado Springs, CO. During this time, he welcomed a son, Pierre. He was united in holy matrimony to his high school sweetheart, Pamela (Sullivan) Jones on March 12, 1983. To this union, they were blessed with three children Ronald Jr., Racheal, and Emorie. After serving in the army for four years, he and his family moved back to Biloxi, Mississippi beginning various careers in the workforce. He developed a passion for automotive repair technology and began his long-life career as a fearless, well-known mechanic. Stepping out on faith, he became the owner and entrepreneur of Import Performance, LLC, which would flourish into one of the most successful foreign automotive repair businesses on the Mississippi Gulf Coast. His countless customers and counterparts knew him for his loyalty and integrity, which was a testament to the standard he upheld. Known to his customers and friends as Mr. Ron or Big Ron, he earned numerous certifications in the his field which included Bosch Certified Service Center, Master Technician, Mitchell 1 Certified Auto Repair Facility, Napa Service Center Dealer, Autologic Service Center, ASE Certified, IMACA Certified, All Data Certified Specialist, and All Data Certified Service Center. Pastor Jones always attributed his success and accomplishments to God and that God would get the glory out of it all. He never let struggles or circumstances affect his determination to be a successful businessman. Pastor Jones also used this as part of his outreach ministry to draw souls to Christ on a daily basis. Pastor Jones was raised in Main Street Baptist Church. In 1989, he and his family joined First United Gospel Assembly, under the leadership of Bishop Otis Rankin, Jr. Pastor Jones accepted his calling as a minister of the gospel in 1991 and was ordained as elder and later, co-pastor. Since his arrival to First United, he served as Outreach Director, Men's Prison Director, Men of Valor ministry, audio technician, and helped in every capacity as right hand to Bishop Rankin. He was a role model, father figure, and friend to so many men within the church and community. His evangelist approach to ministering is what drew many to Christ. The message titles from the Lord that he would preach would always grasp your attention from the beginning, such as “The Devil Can’t Stand You”, “I’m Not Going Down Like That”, and “The Best Is Coming Out of This.” Apart from being a preacher of the gospel, Pastor Jones was also known for his anointed and skillful talent as a bass guitarist. He enjoyed playing along with his fellow musicians and praise team every Sunday, ushering in the presence of the Lord. Out of all the hobbies that he enjoyed, barbequing is what he greatly loved to do. He was the owner of My Daddy’s BBQ and Catering as he found delight in knowing his passion put a smile on so many faces. Pastor Jones was a devoted New Orleans Saints and Alabama Crimson Tide football fan. Every Saturday and Sunday, you could find him enjoying the games during football season. Above all else, Pastor Jones’s role as a husband, father, and grandfather was his first ministry. He took joy in being the pillar of his family and instilling Godly principles into his family until the end. His wife, Pamela, was the apple of his eye, his children were his greatest delight, and his grandchildren had him wrapped around their finger, as they knew him as their “Poppie.” Pastor Jones is preceded in death by his father and mother Henry Sr. and Ruthie Mae Jones. He leaves to cherish his memory, his loving wife of 33 years, Pamela Jones, four children Ronald Jones Jr., Racheal (Denois) Jones Butler, Emorie (Mark) Jones Griffin, and Pierre Jones, six grandchildren Jamiyah “Jam”, Xavius, Kaydence “Baby Cake”, Israel, Mark III “Iron Man”, and Jaxson “Jumping Jax”, one brother Henry (Pat) Jones Jr., two sisters Patricia (Arthur Sr.) Burney and Felicia (Leamon) Wynn, an aunt/sister Aline (Caesar) Purnell, two god-children Makilah Johnson and Maurice Burney, and a host of brother-in-laws, sister-in-laws, nephews, nieces, cousins, and friends. A celebration to honor the life of Pastor Ronald Jones, Sr. will be held Friday, December 9, 2016 at Little Rock Baptist Church in Gulfport, MS with Bishop Otis Rankin of First United Gospel Assembly officiating. The visitation will be from 9am to 11am with the service directly following at 11am. Arrangements have been entrusted to RICHMOND-AUGUST FUNERAL HOME.
To order memorial trees or send flowers to the family in memory of Pastor Ronald Ray Jones, Sr,, please visit our flower store.
Send a Sympathy Card