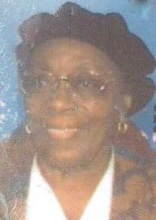 Murnes Smith, 95, of Hattiesburg, MS transitioned from this life into her eternal rest on November 11, 2013. She was born in Slidell, LA to the parents of Wille and Annie Smith. Mrs. Smith lived in Biloxi, MS., and was a member of St. Paul United Methodist Church. Her hobbies were knitting and crocheting. Those that knew her agree that she loved to talk. She was employed for several years as a housekeeper. Due to illness, she later moved to Hattiesburg, MS. Murnes Smith was preceded in death by her parents, Willie and Annie Smith; one son, Sidney and Bobby Jones; four sisters, Lisa, Hattie, Maisie, and three brothers. She will be cherished by her four grandchildren; Derrick Cooper, Donald Woods, Darrel Jones, and Kendrick Kennedy; two nieces, Ann Hopkins & Bernice Mitchell; two great-nieces, Nina Hopkins and Lashawn Coleman; one great-nephew, Roderick Mitchell. Mrs. Smith will lie in state at Richmond-August Funeral Home's Chapel, Thursday, November 14, 2013 from 11am - 4pm. A service will be held also at Richmond-August Funeral Home Chapel at 11am on Friday, November 15, 2013. The family has entrusted the care of Mrs. Murnes Smith to the professional staff of RICHMOND-AUGUST FUNERAL HOME. The family has entrusted the care of their loved one to the professional staff of RICHMOND-AUGUST FUNERAL HOME.
To order memorial trees or send flowers to the family in memory of Murnes Smith, please visit our flower store.