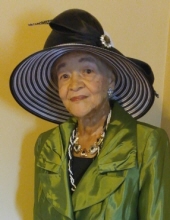 Life and Legacy Of Melvina Davis Smith Melvina Davis Smith was born in Hattiesburg on July 5, 1929, to Evander “Van” Davis and Cora Elizabeth Chambers Davis. She was the third of seven children. Growing up Melvina loved helping others. She played the piano for the Senior Choir until they got a musician. She was about 18. She started attending New Bethel (Missionary) Baptist Church when Reverend E.H. Potter was the pastor. She has attended the same church for all of her life. Her father helped lay the original bricks on the church. She was married on November 21, 1952, to Charles J. Smith, at the age of 23. They were actually married in her parents’ home, which is also the home where she was surrounded by family and friends when she went to be with the Lord. She birthed 6 children: Sharon, Donna, Karen “Pay-Pay”, Michael, Charles “Abe”, and Tracey. She also adopted Tracey Deana Smith and Zakari Letray Smith, as well as raised Kendell Davis. During this time of raising her young children, she worked as a nurse at the hospital in Biloxi. She earned her nursing license through a waiver program. She was a nurse for several years in Dr. Mason’s office and then decided to go to pursue higher education. She attended Tougaloo College from 1975 to 1977. At that time, she transferred to William Carey College in Hattiesburg. She graduated with her BS in Education. She then got a job with Head Start where she stayed for 38 years in Administration. Melvina was a member of the Order of the Eastern Star. She was a Block Captain member. And an avid Saints fan! Melvina was a member of the Senior Mission, the Senior Choir, and on the kitchen committee. She also taught Vacation Bible School faithfully every summer. Her strong foundation in God led to her strong foundation in the family. She loved more than anything to be surrounded by family, not just hers. We shared her and knew that she had enough love to give, to not only us but to the world. She reminded us that God is love and she proved her love to us daily. Melvina was preceded in death by her parents, Evander and Cora Davis; her brothers Evander, Russell, Albert, and Alonzo Davis; her sisters Cora Murphy and Rubye Taylor; her nieces Rhonda Wright, Constance Davis, and Deborah Williams; and her husband Charles James Smith. Melvina is survived by her nine children, Sharon Fairley, Donna Jackson, Karen Fleeton, Michael (Rhonda) Smith, Charles Smith, Tracey Smith, Tracey Deana Smith, Zakari Smith, and Kendell Davis; 15 grandchildren, Stephanie Fairley, TuShonda (Jerome) Boyd, Andrea Howard, Robert Fleeton, Kesha Jackson, Natasha Smith, Ameer Jackson, Adrian Smith, Stephen Smith, Aderes Smith, Aja Scott, Maurice Stephens, Antoinette Jones, Alvin Brooks, and Constance Brooks; 17 great-grandchildren; and a host of nieces, nephews, cousins, relatives, and friends.
To order memorial trees or send flowers to the family in memory of Melvina D. Smith, please visit our flower store.
Send a Sympathy Card