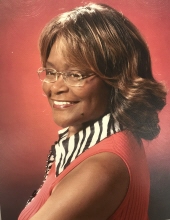 On May 21, 2019, Maudie Estella Hanshaw-Tucker peacefully ascended from this earth with the heavenly angels . . . the Lord guided her journey home. In the summer of 1948, Maudie was born in Ocean Springs, MS through the union of Spencer and Mamie Hanshaw. She was the youngest of nine siblings, all of whom received piano lessons from their mother, Mamie, who was a published songwriter, poet, music teacher, and church organist. A child prodigy, Maudie began her own music career at the tender age of 10, serving as a musician at Macedonia Missionary Baptist Church (MMBC) in Ocean Springs under the leadership of the late Rev. Jesse L. Trotter. She was also an accompanist for the Elizabeth H. Keys High School Choir until she graduated with honors as salutatorian of her high school class. While serving as a musician at MMBC, she led and directed Choir No. 3 which was no small feat for a 10 year old, but Maudie was determined. That drive fueled her as she strived to obtain a four year academic scholarship to Tougaloo College, Tougaloo, MS where she worked as the accompanist for Dr. Ariel Lovelace and concert choir. In 1976, she earned a Bachelor’s of Science Degree in Psychology and a Minor in Music (Applied Piano). She continued to grow in her Christian faith and higher education at Alabama State University in Montgomery, AL where she earned a Master’s of Science Degree in Guidance and Counseling while simultaneously working as a student accompanist for the Music Department. She joined the Lilly Baptist Church under the leadership of Rev. Thomas L. Jordan and served as pianist for morning worship services. In 1977, and after her union with Ernest Tucker, Maudie moved from Montgomery to Clinton Township, MI and began to serve at 2nd Corinthian Baptist Church and Turner Chapel Christian Methodist Episcopal Church as Principal Organist. The Lord led her and her family to join Hartford Memorial Baptist Church under the leadership of Dr. Charles Adams where she briefly served as musician for the Male Chorus. She continued to “pray and play” for various churches in the City of Detroit: Calvary Baptist Church, Enon Baptist Church, Russell Street Baptist Church, Carter C.M.E. Church, Hartford Memorial Baptist Church, Mt. Vernon Missionary Baptist Church, St. John Primitive Baptist Church, Mayflower Congregational United Church of Christ, New Bethel Missionary Baptist Church, and Metropolitan A.M.E. Zion Church. For more than sixty years, Maudie dedicated her life to serving the Lord and His church through excellent musicianship until she retired from that work in 2017. Once she planted roots in Michigan, she also began to thrive in her professional career as a counselor. Working with the State of Michigan, she helped to facilitate a program—Guided Group Interaction—that focused on youth conflict resolution. That assignment led her to work in the Detroit Public School system as a teacher for more than 30 years, specializing in special education. Against all odds, she pursued and obtained a second Master’s of Education Degree with a Major in Special Education. Maudie is preceded in death by her parents, Spencer and Mamie Hanshaw, Sr.; two brothers: Rev. Spencer Hanshaw and Alec Hanshaw; three sisters: Marguerite Hanshaw Battle, Myrtis H. Johnson, Audrey Hart Arnett, and Mildred H. Law. She leaves her children: Jamila Lovejoy Hanshaw of New Orleans, LA, Jamaal Tucker of Detroit, MI, and Jason Tucker of Atlanta, GA; her granddaughter, Amani Thornton; three sisters: Marie Frazier-Cannon of Oxnard, CA, Evangelist Myrtle Middleton of Las Vegas, NV and Mamie Thomas of Jackson, MS; special friend, Wilson Estes of Detroit, MI; and a host of devoted nieces, nephews, relatives, church family and friends to mourn and celebrate her wonderful life Services will be held Saturday, June 1, 2019, at Macedonia Baptist Church, Ocean Springs at 11:00 AM. Friends are invited to visit one hour before. Interment will follow at Crestlawn Memorial Park, Ocean Springs. Richmond August Funeral Home is honored to serve the family of Ms. Maudie Hanshaw Tucker.
To order memorial trees or send flowers to the family in memory of Maudie Hanshaw Tucker, please visit our flower store.
Send a Sympathy Card