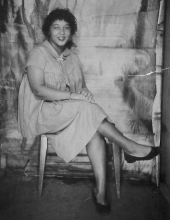 Who can define a virtuous woman? for her price is far above rubies. "Proverbs 31:10" What a joyous day it was on October 10, 1937. Mary was born to her parents, John and Millie White. She was the first of eight children born to this family. Mary completed her formal education at Turkey Creek Consolidated High School in Gulfport, MS. She was united into Holy matrimony with with Luvern Pittman, Sr. and to this union eight beautiful children were born: Gloria, Patricia, Luvern Jr, Jacqueline, Lynn, Temple, Linda, and Tracy. She was a nurturing woman, so she made sure her children were always her primary duties. She moved to Denver, Colorado in 1979 to join her sisters. Because of natural ability and a caring heart, she worked with abused and neglected children. She continued this work for several years. Mary returned to Mississippi to care for her Mother in spite of her own health. In her free time, she enjoyed watching soap operas. One in particular was General Hospital. Her sister Nancy reflects on the times they spent together playing Bingo and reminiscing on the shopping Mary and late sister, Yvonne, would do. In the summers, both Mary's home and heart were open to her grandchildren. They reflect on the wonderful meals and the taste that no other could compare. Her great grandchildren were later able to taste and feel the love that was put into every meal. Mary was a woman of great faith and the Lord Jesus Christ; and this was something that she instilled in all her children. Her fun spirited love of life and willingness to chances, the romping card games with Cora White that sometime would last overnight, watching black history movies with her children and later her grandchildren will all be greatly missed. Mary joined her family who preceded her in death, her parents, John Sullivan White, Sr. and Millie Blackwell White; one son, Temple Houston Pittman; sisters, Yvonne Boykin and Polly White; and brothers, John White, Jr., and Ronald White. Those left to cherish her memory and mourn her loss include her children, Gloria Pittman, Patricia A. Pittman, Linda "Mookie" Pittman, all of Gulfport, MS, Luvern "Cartoon" Pittman, Jr., Jacquline Pittman, Lynn (Ronnika) Pittman, and Tracy(Sarah) Pittman, all of Denver, CO; three sisters, Marchelda White and Valerie White, both of Gulfport, MS, and Nancy Chapman of Denver, CO; six brothers, Albert White, Donald White, Jerome White, Garland White and Farland White, all of Gulfport, MS, and Terry White of Jackson, MS; close friend, Lucielle Ray; 24 grandchildren; 37 great-grandchildren; and a host of nieces, nephews, cousins, family, and friends.
To order memorial trees or send flowers to the family in memory of Mary White Pittman, please visit our flower store.
Send a Sympathy Card