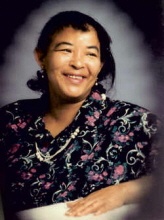 Mrs. Marie Washington, a native of Biloxi, passed away Thursday, August 18, 2011 in Slidell, LA at the age of 61. She was born January 13, 1950 to Mr. Willie Payton, Sr. and Mrs. Gaynell May Payton. Marie grew up in Biloxi where she enjoyed movies and plays. She accepted Christ at an early age and was a member of First Missionary Baptist Church of Biloxi. Marie was employed with Select Hospital where she worked as a dietician. She was joined in holy matrimony to Mr. William H. Washington. To this union, four children were born. Three sons, Mr. Robert Washington, Mr. Lafonte Washington and Mr. William Washington; and one daugther, Mrs. Barbara Tate. Mrs. Marie Washington was preceded in death by her parents, husband and three sisters, Ms. Brenda Payton, Ms. Virginia Payton and Mrs. Claudia Riley. She leaves to cherish her memory her four loving children, five grandchildren, two nieces; Ms. Patricia Riley, Ms. Laniece Payton and a host of relatives and friends. The family has entrusted the care of their loved one only to the professional staff of RICHMOND-AUGUST FUNERAL HOME, Biloxi. (228) 436-6722
To order memorial trees or send flowers to the family in memory of Marie Washington, please visit our flower store.