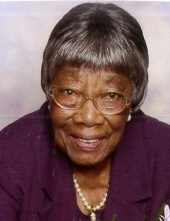 Sis. Lillie V. Taylor, 94, was born to the union of the late Lynch and Mary McNair, December 18, 1924, in Bassfield, Mississippi. She made her transition to a new home on February 22, 2019, at the Pillars of Biloxi while also under the care of Kare-In-Home Health Services. Lillie lost her mother at an early age, but she had a good father and grandmother who took great care of her. As a child, she was very ill and needed daily checkups by Dr. Blunk. It was by God’s grace and mercy God that she defeated the medical odds to see the age of 94. But, God! The best advice she would give to anyone was “Do what you can, while you can.” Lillie started her career in the old Markham building and later transferred to Harrison County Family Court, where she served as head chef for over 30 years. She was a great chef, cooking for more than the staff and children on site. Her meals were loved by officials from all over town. Though short in stature, her love was mighty and towered over all. She lived a selfless and simple life. Her main concern in life was caring for others. Her love was reciprocated as well by many. If you asked her how she was feeling, she would say, “I am kicking, but I am not kicking high.” Now, she is kicking high with the Lord. Lillie's spiritual foundation was laid in the Lillie Mae Baptist Church in Georgetown. Sis. Lillie was a faithful, dedicated, and upstanding servant of Morning Star Missionary Baptist Church where she served devotedly as an usher. Lillie was preceded in death by her parents: Lynch and Mary McNair; son Roy L. Alexander; brothers: Jack and Buck McNair. She leaves to cherish her memory, her granddaughters: Vontella Jackson (Cedric), Kimberly Ross (Cartess); grandsons: Roy Alexander (Keitha), Tyrone Alexander, and Edwin Mallard and two god-daughters: Barbara Lee and Cuma Kirkland. She had a host of great-grandchildren, relatives, and friends.
To order memorial trees or send flowers to the family in memory of Lillie V Taylor, please visit our flower store.