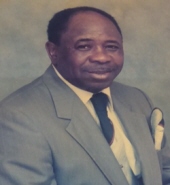 Mr. Leo Alan Russell, 85, of Biloxi, Mississippi, passed away on Tuesday, April 7th, 2015, at Biloxi Regional Hospital. He was born in Ocean Springs, Mississippi, on April 29, 1929 to Ira Russell and Tillie Mae Stewart. Leo attended and graduated for Ocean Springs Colored High School. He was honorable discharged from the United States Army in 1956. He was a retiree from the A&P Food Store, and the United States Postal Office. He also worked as a chauffeur for Richmond-August funeral home and for Marshall funeral home. He was baptized on November 11th 1941, at Macedonia Baptist Church. He was currently a member of the St. Paul United Methodist Church, where he served on the usher board and worked with the youth center. Leo was also a member of the 576 Vernon Gilbert Lodge Order of Elks. Leo was preceded in death by his parents Ira and Tillie Mae, his wife Lillie Mae, and his sister Dorethea Shelton, and his son Sammy Lee Thurman. Leo is survived by his sons, Allen Russell (Shirley), Leo McCelland (Chelsea) his special sister (Marie), several brothers and sisters, his honorary son Jerome Jackson, as well as his grandchildren and a host of relatives and friends. He will also be remembered by his special friend Mamie Donald Funeral services for Mr. Leo Russell will be held at St. Paul United Methodist Church on Tuesday, April 14, 2015. Richmond-August Funeral Home is honored to serve the family of Mr. Leo A. Russell.
To order memorial trees or send flowers to the family in memory of Leo Russell, please visit our flower store.
Send a Sympathy Card