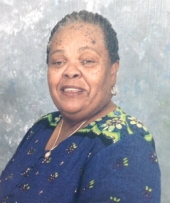 Laura Kathryn Sias Reed, 65, of Gulfport, MS, transitioned to Heaven on April 1, 2014. Laura Kathryn was born in Biloxi, MS, on October 10, 1948 to Evelyn Brown and Martin Russell. She attended M. F. Nichols and graduated in 1967. In 1970, she married Sidney Reed. Laura Kathryn spent her life taking care of people and making people smile. She was a nurturer and raised many children from Biloxi to Gulfport, as well as, providing them with birth names and a place to live. She was named "Wittiest Person" and "Teachers Pet" during her school years because she was determined to make everyone else feel loved. Laura Kathryn accepted Christ at an early age at Our Mother of Sorrows Catholic Church. Later in life, she rededicated her life to Christ and became a member of Lighthouse Apostolic Holiness Church. She was an encourager and promoter for strengthening people and just being there whenever she was needed. As her health begin to fail, if she couldn't travel to get to you when you needed her, she would call and minister to you and let others know her phone line was still available whenever they needed her. She was preceded in death by her mother and father, a sister, Dorothy Shavers Williams, and a daughter, Undrelle Reed. Laura Kathryn leaves to celebrate her life, one brother, Atlas (Brenda Boykin) Brown, six children, Taveo Sias of Gulfport, Danyel (Dwayne) Hillian of Philadelphia, PA, John Reed, Nancy Gray, Jarrod Reed, and Ireon Brown of Gulfport, MS, 17 grandchildren, 4 great grandchildren, a devoted cousin, Darren Watson, two devoted friends, Joan Gaines and Bobby Hawthorne, Sr. of Biloxi, MS, several children she raised who called her Mama, Granny, and L.K., and a host of relatives and friends. Funeral services for Laura Kathryn Sias Reed will be held April 5, 2014, at 11 a.m. at Main Street Baptist Church in Biloxi, MS. Visitation will be held one hour before the service. The family of Mrs. Laura Kathryn Reed has entrusted her care to the professional staff of Richmond-August Funeral Home.
To order memorial trees or send flowers to the family in memory of Laura Kathryn Sias Reed, please visit our flower store.
Send a Sympathy Card