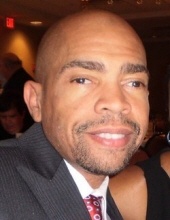 Kendrick R. Kennedy was born on September 11, 1971 in Biloxi, MS and departed this world on June 18, 2015 in Birmingham, AL. He was preceded in death by his father Bobby Jones and beloved grandparents, James C. Robinson, Beatrice Robinson and Murnice Smith. Kendrick is survived by his wife, Angelitta Darden-Kennedy; son, Christopher Kennedy; mother, Carolyn F. Kennedy; two brothers, Marc Kennedy (Kimberly); Bryan (Therese) McLaurin; sister Monica McLaurin; aunt, Patricia A. Blocker, numerous nieces, nephews and cousins. We were fortunate to have had him in our lives. He is gone but not forgotten. Kendrick was baptized as a young child at Main Street Missionary Baptist Church. He remained a resident of Biloxi, MS throughout his lifetime. As a child, Kendrick was diagnosed with diabetes and thus began his struggle to overcome challenges. He received his Associate of Arts degree from Mississippi Gulf Coast Community College, Jefferson Davis Campus. He graduated Summa Cum Laude with a Bachelors of Science in Management Information Systems at The University of Southern Mississippi, Gulf Coast Campus. As an undergraduate student, Kendrick served as President of the Student Government Association, was recognized as an Outstanding Student for Academic Achievement and Community Involvement, received an Award for Outstanding Student in the field of Management Information Systems, and was recognized for his final thesis during the Second China Summer Workshop on Information Management in Kunming, China. Kendrick completed his education by obtaining his Juris Doctorate from The University of Mississippi School of Law in Oxford, MS. As a law student, Kendrick was a member of the Black Law Students Association, Public Interest Law Foundation and was admitted to the state and federal courts in Mississippi by passing the state bar exam on his first attempt. He was also served at the Southeastern District Director of the Magnolia Bar Association and was a member of the Mississippi Bar Association. It should also be noted that at the time, Kendrick was the first blind student admitted to Ole Miss�s law school in over 30 years. When he lost his sight, he was advised not to pursue a college education; he strongly disagreed with this recommendation and aggressively pursued his educational goals and final dream of practicing law. This dream was fulfilled when he secured a position as associate attorney with Conway & Associates Law Firm of Gulfport, MS. Kendrick was a strong advocate for persons with disabilities and remained very active in the community by serving as President of the Gulf Coast Chapter and board member of The National Federation of the Blind of Mississippi (NFB), being a member for Disability Rights of Mississippi, and participating with the Mississippi Volunteer Lawyer�s Project. When asked to comment on his life�s challenges, he states, �Most would say they could not do what I have done because of the challenges I have faced; but my challenges became opportunities�. It is because he overcame so much to achieve the goals he set, that his life should forever remain a testimony to perseverance. Work hard and overcome to achieve. �Many of life�s failures are people who did not realize how close they were to success when they gave up� --Thomas A. Edison Funeral services will be held Thursday, June 25, 2015, 11:00 a.m. at Main Street Missionary Baptist Church, 321 Main Street, Biloxi, MS. Visitation will begin at 10:00 a.m. The family is requesting that in lieu of flowers please consider a donation to the National Federation of the Blind of Mississippi, P.O. Box 1515, Jackson, MS 39215 The family of Mr. Kendrick R. Kennedy has entrusted his care to the professional staff of Richmond-August Funeral Home.
To order memorial trees or send flowers to the family in memory of Kendrick Kennedy, please visit our flower store.
Send a Sympathy Card
Send a Sympathy Gift