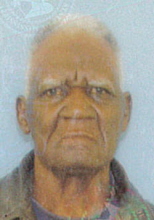 Mr. Jim Robertson,Jr., a long-time resident of Biloxi, passed away August 2, 2014; at the age of 84. Jim Robertson, Jr., the second oldest child, was born on November 3, 1929 to Mary Hall and Jim Robertson, Sr. He confessed Christ at an early age and attended Ebenezer Baptist Church in Forkland, Alabama. He was preceded in death by his wife, Mary Alice; both of his parents, Mary and Jim; 2 sisters: Barbara Pelt and Celestine Wright. Jim leaves to cherish his precious memories, 2 sisters, Mrs. Dorothy (Howard) Wallace of Demopolis, AL; Mrs. Annie Owens of Detroit, Michigan and a devoted friend, Kay Horne, as well as a number of nieces, nephews, cousins and other relatives and friends. He will be remembered fondly by his friends and neighbors in the East Biloxi Community as a faithful friend and dutiful watchman, who was always willing to lend a helping hand to others. Services will be held Thursday, August 14, 2014 at Richmond-August Funeral Home. Visitation from 12:00 noon to 1:00PM with funeral services beginning at 1:00PM. The family of Mr. Jim Robertson has entrusted his care to the professional staff of Richmond-August Funeral Home.
To order memorial trees or send flowers to the family in memory of Jim Robertson, please visit our flower store.
Send a Sympathy Card