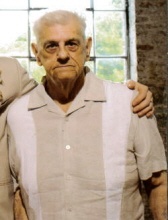 Mr. Jerry Edward Borries, 75, of Gautier, Mississippi passed away Thursday January 16, 2014. A veteran of the United States Navy, Jerry will be sadly missed by his long time companion, Dottie Balius and a host of other family and friends. A memorial service in Jerry's honor will be held at 2:30PM on Sunday, January 19, 2014 at Bethel Missionary Baptist Church in Gautier. The family of Mr. Jerry Edward Borries has entrusted his care to the professional staff of Richmond-August Funeral Home.
To order memorial trees or send flowers to the family in memory of Jerry E. Borries, please visit our flower store.