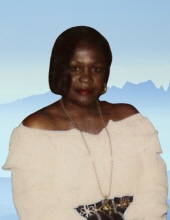 Janie Mae Davis, a resident of Biloxi, MS, transitioned from this world to eternal rest at the New Orleans VA Saturday, January 16, 2021, at the age of 57. Janie began her formal education in the Moss Point School District and graduated from Moss Point High School (Class of 1982). After graduation, Janie enlisted in the United States Army in 1985. Shortly thereafter, she attended Hinds Community College and received an Associate’s degree with a license in Practical Nursing. Janie loved helping people and that was no secret. It was because of this passion, that led her to become a traveling nurse for almost 20 yrs. Within this career path, Janie was afforded the opportunity to love and encourage so many while seeing much of the world. Janie was a loving mother, grandmother, sister, aunt, and friend. She had a kind, caring, and bubbly personality. She never met a stranger and had an infectious laugh and smile. Janie had a special way of connecting with people and would leave anyone she interacted with on a positive note. She had a true relationship with God and maintained her strong faith until He called her home. Janie is proceeded in death by her parents Joe and Lillie Davis; sister Joe Ann Davis Benton; brother Michael Davis and niece Chrystie Benton. Left to cherish her memories and carry out her legacy are her 3 children: Raven Nicole Davis, Rapheal James (Christina) Davis, and Ebony Symone Davis; one brother Joe (Cynthia) Davis; a devoted aunt, Janie Stewart; four grandchildren: Madison Nicole Medina, Averie Jane Davis, Ayden James Davis, and Audrey Elise Wilson; one great-nephew Christian Benton and one great-niece McKenzie Benton; devoted friends: Angie Bartley, Dinah Lee and Lisa Reynolds; and a host of relatives and friends. Funeral services for Ms. Davis will be held Tuesday, January 26, 2021, at Infinity Chapel at 12:00pm. Visitation will start at 11:00 am. Infinity Funeral Home is honored to serve the family of Ms. Janie M. Davis. Inquiries: 228-436-6722
To order memorial trees or send flowers to the family in memory of Janie Mae Davis, please visit our flower store.
Send a Sympathy Card