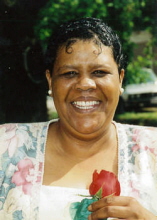 Janell Briscoe Eaglin, age 68, a resident of Ocean Springs, Mississippi; formerly a resident of Lake Charles, Louisiana; passed away January 1, 2015 at Singing River Hospital in Pascagoula, Mississippi. She was born in Sunset, Louisiana December 29, 1946; the daughter of Ollie Briscoe and Mildred Green. Janell also attended school in Sunset, Louisiana. Janell spent her life working, taking care of others, and giving anything and everything she could to those in need. She worked in several capacities of the church, favoring the Usher Board; eventually becoming Usher Board President. Always one to help others, Janell volunteered at women's shelters and with several other charities. She not only showed her love for God by serving others, but also by faithfully getting on the Morning Prayer Line, reading her Bible and praying every day. A woman of diverse interests, Janell loved playing cards with her family and friends. Later in life, she found great enjoyment spending time with her only son-in-law, Ryan Chrissis. Janell is most known for her unconditional love towards others and her ability to always find the good in others. Janell, also known as �Fisher� was preceded in death by her parents, Ollie Briscoe, Sr. and Mildred Green. She is survived by four sisters Adeline Jackson, Gloria Wiley, M Fairman, and Theresa Henry; three brothers; Ollie Briscoe, Jr., James Smith, Joseph "Jojo" Anderson; four children; Reginald (O-Toski) Eaglin, Andrew (Kelly Burleson) Eaglin, McArthur (Cindy) Eaglin, and Gaynell (Ryan) Chrissis; eleven grandchildren; eight great-grandchildren, and a host of other family members and friends. Funeral services for Janell Eaglin will be held Saturday, January 10, 2015 at 12 o'clock in the afternoon at Old Emmanuel Baptist Church in Lake Charles, Louisiana with visitation beginning at 10:00 AM. The family of Ms. Janell Briscoe Eaglin has entrusted her care to the professional, courteous staff of RICHMOND-AUGUST FUNERAL HOME.
To order memorial trees or send flowers to the family in memory of Janell Eaglin, please visit our flower store.
Send a Sympathy Card