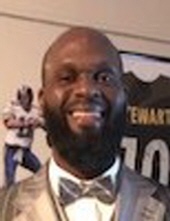 James Fitzgerald Lacey, 50, a resident of Gulfport MS, passed away, December 1, 2018. James was born in Gulfport, on March 16, 1968, to James W. and Genevieve Lacey. James attended Harrison Central High School where he received his diploma in 1988. Several years later James received his cosmetology/barber license. At an early age, James attended Progressive Missionary Baptist Church. In 1994, James met the love of his life, Keisha Johnson. After 5 years of dating on May 15, 1999, they decided to marry. In that union, they had two beautiful children, James Tyree Lacey 20 and Amirrah Kamriah Janae Lacey 12. James spent his working career as a barber at Riley Barber Shop, doing what he loved best, and that is making sure everyone had the best haircut on the gulf coast. James had many passions, like collecting shoes, raising pit bulls, eating and making sure he had the loudest music in his Lincoln. Not only did he love being a barber, collecting shoes, raising his pit bulls, eating and music, but he also LOVED his family. James was preceded in death by his father James Willie Lacey and his mother Genevieve Lacey; and two brothers: John A. Bush and Reginald Bush. He leaves to cherish his memories, his loving and devoted wife Keisha L. Lacey; his son James Tyree Lacey and daughter Amirrah Karmiah Janae Lacey of Gulfport MS; Four sisters and one brother: Mrs. Deborah Dyess (Jimmy), and Mrs. Diane McGee (Charles) both of Gulfport, MS; Mrs. Antionette Hemphill (Douglas) Greer, of South Carolina; Mr. Levi Phillips (Gisela) of Stone Mountain, GA, and Mrs. Carolyn S. Bush (Sister-in-law) of Waveland, MS; Two special nieces that he helped raise: Carrie McCree and Arihanna Johnson and a host of other relatives and friends. Funeral services for James Fitzgerald Lacey will be held Saturday, December 1, 2018, at 1:00 p.m. at Grace Temple Baptist Church. The visitation will be at 12:00 noon. Funeral Arrangements have been entrusted to Richmond August Funeral Home.
To order memorial trees or send flowers to the family in memory of James Fitzgerald Lacey, please visit our flower store.
Send a Sympathy Card