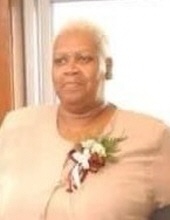 Minister Gwendolyn Marie Jones Creagh, 68, a resident of Biloxi, MS, passed away, Tuesday, December 24, 2019, at Merit Hospital in Biloxi. Gwen was a woman of deep faith with a sharp wit and an exuberant personality. Born in Madison, Mississippi, the daughter of Edward and Ruby Mae Burney Jones, Gwen moved to the Mississippi Gulf Coast during her teen years and immediately became known in the community for her singing voice and abundance of talents. She graduated from M.F. Nichols Senior High School in 1969 and studied Music Performance and Voice at Alcorn State University. Gwendolyn Creagh spent her working career as a bus driver, mainly for the Biloxi Public School District, for well over 20 years. She affectionately called the students who rode her bus “her babies” and though she was strict, they each gave “Ms.Gwen” the utmost respect. However, if people did not know her from driving the bus, they knew her for her powerful voice. As a lover of music and a gifted songstress, Gwen often sang across the Mississippi Gulf Coast. You could always recognize her contralto voice soaring above any choir or crowd, without a microphone. She loved singing gospel music, especially the old hymns of the church. Gwen believed in the power of prayer and God turned around her life giving her a testimony of recovery. As a licensed minister, she preached about the saving, healing, and delivering power of Jesus Christ. At the time of her death, she was a member of Family of Faith Christian Church in Biloxi. Gwen was preceded in death by her parents, Edward and Ruby Mae Burney Jones; her daughter, Portia Patrice White; two brothers, Herman Partee and Gregory Alonzo Jones, and her husband, Edward Creagh. Gwen leaves to cherish her memory a sister, Margaret Partee of Taylor, MI; three daughters, Reverend Dr. Theresa S. Thames of Princeton, NJ, Tahira Creagh of Meridian, MS and Bridgette Creagh of Hattiesburg, MS; nine grandchildren, Delmost Deshun White, Tarik Hopper, Jessica Haynes, Jessie Haynes III, Jaylon Creagh, Jessilynn Haynes, Darien Haynes, Antonio Haynes Jr, and Tevin Creagh; and one great-grandchild Kingston Jammaar Williams and a host of extended family and friends
To order memorial trees or send flowers to the family in memory of Gwendolyn Marie Jones Creagh, please visit our flower store.