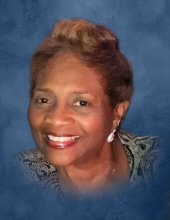 Gayle DonnaWeen Robinson Cook exuded the heart of a servant. She walks depiction of servanthood and lived her life for others. Gayle was born October 1, 1953, to Henry and Carrie Mae Robinson of Gulfport, MS. Gayle attended North Gulfport Elementary and North Gulfport High Schools. She graduated from North Gulfport High School in 1971. In the Robinson household, no one was allowed in the kitchen after the kitchen was cleaned. However, Gayle was a lover of French fries and one night she decided she was going to fry her some…in the bathroom. She cleaned the bathroom as best as she could then went to the kitchen to retrieve a pan and some grease. She then proceeded to fry the French fries on top of the gas heater in the bathroom. Of course, she was caught by her mother but thankfully she didn’t get in trouble. Gayle went on to attend Alcorn State University and graduated with a degree in Elementary Education. One day, while attending Alcorn, Walter was talking outside of his dorm with a few friends and a certain young woman caught his eye, so he continued to watch her from a distance. He planned his pursuit to make her his own and that’s exactly what he did. This young woman happened to be Gayle. Their courtship flourished, and they were married on October 21, 1978. Their love began to grow and, as God would have it, two daughters were added to their bubble of love: Sirvirther and Bianca. Gayle pursued her dream of teaching by obtaining her Master’s Degree in Education from William Carey University. She did her student teaching in several school districts but ultimately found herself at D’Iberville Elementary School as a second-grade teacher. Gayle taught for over 35 years. She had the opportunity to impact thousands of children over the course of that time teaching all grades but retiring as a Kindergarten teacher. Gayle was known for pushing her children to be the best they could be and not allowing them to settle for anything less. Gayle also gave time to the local Boys and Girls Club. It was her belief to inspire, challenge, and love children. Gayle did just that. Gayle’s faith in God can be attributed to her upbringing. The Robinson children were KNOWN for being led by their parents to Mount Olive Baptist Church now known as Greater Mount Olive Baptist Church in Gulfport, MS. The Robinson children are on record for attending Sunday School, 11:00 AM service, any afternoon program, Baptist Training Union (BTU) Congress, prayer meeting on Wednesday nights, leading devotion, singing in the choir, etc. As God would have it, she yielded herself in the same manner, once she married Walter and joined New Bethel Baptist Church. Gayle served in the choir, as a Sunday school teacher, Youth Director, served on the Women’s Intermediate Auxiliary, Good Samaritans, Senior Mission, supported the Ruby Green Scholarship in honor of Walter’s kindergarten teacher, and anywhere else she was needed. Gayle was notorious for having the heart to serve others. She would extend herself in the time given and in need. Because of this, those around her could not help but be influenced to do the same. Love is a gift shed abroad from heart to heart. Gayle’s heart was full of love and light. It was felt by anyone who crossed her path whether she knew you or not. Her smile was infectious, her heart to give was enormous, and her faith in God reminded everyone to count it all joy. Gayle was preceded in death by her parents, Henry and Carrie Robinson; her brother, Quincy Robinson; her sister, Carolyn Sims; and her husband, Walter Cook. Gayle is survived by her two daughters, Sirvirther Cook and Bianca (Abra) Taylor; four grandchildren, Javian Foules, Abra Taylor, Jr., Kayden Taylor, and Aubree Taylor; her sisters, Dorothy (Charles) Knight, Janice (Marcellus) Holmes, Wanda Hayes, and Angela Robinson; her brothers, Henry Robinson, Jr., and Samuel (Stephanie) Robinson; and a host of other relatives and friends. In lieu of flowers, the family is requesting Donations to the Ruby Green Scholarship Fund in care of New Bethel Baptist Church.
To order memorial trees or send flowers to the family in memory of Gayle Cook, please visit our flower store.
Send a Sympathy Card
Send a Sympathy Gift