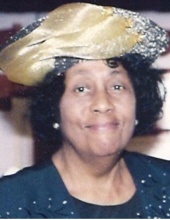 Evangelist Mattie L. Williams was born in Gulfport, Mississippi to the late Deacon Jesse and Mother Luella Jones. Deacon and Mother Jones were residents of Gulfport for over sixty years and were pioneers of the St. Andrews Church of God in Christ. Evangelist Williams was the youngest of four daughters and one son. She was preceded in death by her parents and all of her siblings: the late Mother Ruby Harris, State Supervisor of Women for the Mississippi Southern Second Jurisdiction of the Church of God in Christ, Jessie Mae Harris, Luella Hall, Lillie Preston and Walter Jones. On December 18, 1955, she was united in marriage to Mr. Willie Williams, Jr., who preceded her in death in Chicago, IL in 1983. She was educated in the Gulfport Public Schools System at 33rd Avenue High School. She attended music school under Mrs. R. Holmes and Mr. Jesse Holmes. Following high school, she attended Jackson State College in Jackson, MS. She furthered her education at Kennedy Kings College and Lucy Flowers College of Nursing in Chicago. After moving to Chicago, she united with the Roberts Temple COGIC, the mother church of the Church of God in Christ in Illinois under the leadership of Bishop W. M. (Papa) Roberts, Elder E. J. Dunkins and State Supervisor, Mother Carrie Cantrell. This is where she received the baptism in the Holy Ghost in 1950. She worked at Roberts Temple faithfully in the Evangelist Department until the death of Bishop Roberts. She then moved her membership to Faith Temple COGIC under the leadership of Bishop H. W. Goldsbury. She also served there faithfully in the Evangelistic Department as an Evangelist and choir member. Years later, after the death of Bishop Goldsbury, she joined the Pentecostal Temple COGIC under the leadership of District Supt. R. C. Edwards. There she also served faithfully with the Evangelistic Department and was President of the Pastor’s Aide Committee and the Pastor’s Travel Committee. During her years in Chicago, Evangelist Williams worked in the Chicago Board of Education Attendance Office. She also worked at the United States Steel Mill, where she was a process inspector. In 1994, she retired from the federal government, where she was a supervisor in the Science and Engineering Department for 32 years. She received numerous awards from the University of Illinois at Chicago, where she served on the Board of Directors. In 1996, she moved back to Gulfport, and rejoined her home church, St. Andrews COGIC, under the leadership of the late Pastor Rome B. Graves and Mother Ruby Harris, State Supervisor. There she served untiringly as the President of the Young Women’s Christian Counsel, Prayer & Bible Band teacher, Evangelist and whatever her hands could find to do. She also worked diligently on the District and State levels as the Gulf Coast District Prayer and Bible Band President and worked closely with the late Mother Ruby Harris and Mother Mary Eaton, current Supervisor of the Department of Women for Mississippi Southern Second Jurisdiction of the COGIC. She leaves to cherish her memories devoted nephews, Mr. James (Ollie) Harris of New Orleans, LA and Mr. Henry Bush of Orange Grove, MS; devoted nieces, Evangelist Mae Perkins, Mrs. Deborah (Walter) Walker and Mrs. Gennie Ruth Pace, all of Gulfport, MS and Mrs. Lydia Moore of Virginia; a devoted friend, Evangelist Josephine (Perry) Jackson of Gulfport, MS; caregiver and devoted friend, Mr. Anthony Clinton, a devoted cousin, Evangelist Edna Jamison and a host of other nieces, nephews, relatives, Saints and friends. Services for Evangelist Mattie Williams will be held at 11 am, Saturday, March 10, 2018 at St. Andrews Church of God In Christ, with visitation one hour before. The professional staff of Richmond-August Funeral Home has been entrusted with the care of Evangelist Mattie Williams. Inquiries: 228.436.6722.
To order memorial trees or send flowers to the family in memory of Evangelist Mattie Williams, please visit our flower store.
Send a Sympathy Card
Send a Sympathy Gift