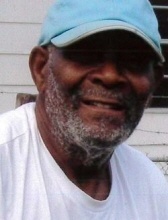 Eugene Daniels, Sr., 84, passed away, February 15, 2015. He was born in Bohns, MS, to Eli and Viola Daniels. Eugene was a graduate of Nichols Colored High School. He was united in holy matrimony to Ms. Juanita Vereen on March 19, 1950. Eugene�s love for gardening was shown in his beautiful yard and plants he grew. He will be remembered for his kind-hearted, generous nature and easy smile. Eugene was preceded in death by his parents and one son, Eugene Daniels, Jr. He is survived by his loving wife of 64 years, Juanita Daniels; two sisters, Azer Lee and Jessie May White; son, Billy Daniels; daughter, Marilyn Allen; and a host of relatives and friends. Services will begin at 2:00pm Saturday, February 21, 2015 at New Bethel Baptist, with visitation one hour before. The professional staff of RICHMOND-AUGUST FUNERAL HOME has been entrusted with the care of Mr. Eugene Daniels, Sr. Mr. Eugene Daniels, 84, of Biloxi passed away Sunday, February 15, 2015. Visistation for Mr. Eugene Daniels will be held Saturday, February 21, 2015 at 1:00pm at New Bethel BC in Biloxi. Service will begin at 2:00pm. For updates: call 228-436-6722 or visit www.richmondaugustfh.com. Arrangements have been entrusted to RICHMOND-AUGUST FUNERAL HOME.
To order memorial trees or send flowers to the family in memory of Eugene Daniels, please visit our flower store.