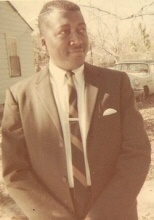 Rev. Esters �Sonny� Jones was born on December 15, 1934, in Crystal Springs, MS. He was born to his loving parents, the late Ollie and Ethel Lee Jones. After faithfully serving the Lord, he entered into his eternal rest on Monday, August 15, 2011 at Biloxi Regional Medical Center. At an early age he accepted the Lord into his life and became a member of Church of Christ Holiness in Crystal Springs, MS. He was united in holy matrimony to Ms. Rosie Lee Noble on March 16, 1964. From this union two children were born: Adriane Marie Jones-Wells and Darren Lamant Jones. They brought joy to his life and happiness to his years. A devoted Husband, Father and role model, he worked for the Coca-Cola Bottling Company for 32 years. In the 1960�s Rev. Jones united with First Missionary Baptist Church, in Biloxi, MS, under the leadership of Rev. Holloway. In years to come, Rev. Jones served as a Trustee, Deacon, Sunday School Teacher and was one of the founders of the Brotherhood Choir. Rev. Jones also sang in the Chancellor Choir under the leadership of John and Alma Pettis. Rev. Jones later accepted his calling and became an ordained minister at First Missionary Baptist Church under the leadership of Rev. O.D. Gilmer. He loved the Lord with all of his heart and served his church faithfully until his health began to decline. Rev. Esters Jones was better known as �Sonny� to his family. He will be remembered for the many family trips, church outings, hard work and his giving heart. �Sonny� was known for his entertaining personality. He had a vast love of music, singing, comedy, fishing and reading. A self-taught musician, he played the piano, flute and guitar. He was also a photographer, videographer and artist. He loved to draw, take pictures, have his picture taken and produce many movies of family and fun events. Many times Rev. Jones would be the Star of these movies. Rev. Jones was a pillar of the community and stayed active in his children�s lives. For example, after working a ten to twelve hour shift at the Coca-Cola Bottling Company, he still found the time to escort his beautiful daughter, Adriane, to the Debutante Ball and go watch his son, Darren, play football and baseball. Rev. Jones loved football and never missed a chance to watch the New Orleans Saints play, especially on Sundays. Preceding him in death are his parents, sisters: Anna Bell McGowan and her husband Luther of Crystal Springs, MS; Christine �Susie� Crawford and her husband Robert of Biloxi, MS; and Mattie Alexander of Biloxi, MS; brothers: Eddie Jones Sr. and wife Doris of Shreveport, LA; Walter Jones and his wife Rose of Crystal Springs, MS; and Henry Jones Sr. of Biloxi, MS. He leaves behind the devoted Wife and cherished Mother of his children: Rosie Lee Jones of Biloxi, MS. Two precious children: Adriane Marie Jones-Wells of Wiggins, MS and Darren Lamant Jones of Gulfport, MS. Three grandchildren: Braylen D�Andre Jones, Jasmine Simone Wells and Sydney Gabrielle Wells. Three sisters: Mozella Johnson (Earnest-deceased) of Crystal Springs, MS; Mary Margaret Strong (George) of Biloxi, MS; and Charlene Thompson of Biloxi, MS. One Sister-in-Law: Ruthie Mae Jones of Biloxi, MS. One Brother-in-Law: Alex Alexander of Biloxi, MS. Rev. Jones also leaves behind a host of nephews, nieces, cousins, relatives, and friends. His long time neighbors of the Hiller Park Community always made sure that �Sonny� and Rosie were well taken care of and always watched out for them. The kindness of these neighbors will always be appreciated and valued. This kind of generosity can only come from what as we know as True Friends. The Jones Family would also like to acknowledge and thank any and everyone who came by just to chat or made sure they were having a good day. God bless you all. The family has entrusted the care of their loved only to the professional staff of RICHMOND-AUGUST FUNERAL HOME. (228)436-6722
To order memorial trees or send flowers to the family in memory of Esters Jones, please visit our flower store.