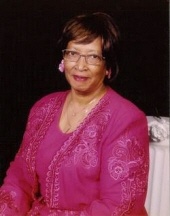 Mrs. Essie Mae Lindsey was born June 8, 1936 in Marvin, Alabama to the late Mr. and Mrs. Jimerson Coleman. She attended school in Marvin, Alabama. After the death of her father, the family moved to Mobile, Alabama where she attended Emerson High School. Essie Later moved to Gulfport, Mississippi where she graduated from North Gulfport High and then Turkey Creek High School where she also graduated. Her first job was the Lerner�s Shop in Gulfport, where she later retired after 35 years of dedicated service. Mrs. Lindsey continued to work after her retirement at Fashion Touch Boutique for 7 years until her health began to fail. Essie united with Greater Mt. Olive Baptist Church under the leadership of the late Rev. D. B. Barnes, Dr. Nathan Walker, Jr., and continued to serve as a faithful and devoted member under the leadership of Rev. Phillip McSwain, Sr. Mrs. Lindsey attended Sunday School, was a member of Senior Women Missionary Union, where she served several years as president; member of the Adult Choir, worked in the kitchen of the church for a number of years, member of the Beautification Committee, attended Bible Study and was a member of the Usher Society also for a number of years. Essie was a hard worker in the North Gulfport Community. She helped to organize the Civic Club for North Gulfport, organized and helped with the Good Deeds Community Center, was a member of Easter Lily Chapter #440 O. E. S., where she served as Worthy Matron for 13 years; District Deputy, Conductress and Associate Conductress and was a member of the NAACP. Mrs. Essie Lindsey was called home to be with the Lord on October 11, 2014, at Gulfport Memorial Hospital, Gulfport, MS. Mrs. Essie Lindsey was preceded in death by her parents and one brother, Norman Millender. She leaves to cherish her loving memories her husband of 44 years, Mr. Raymond Lindsey of Gulfport, MS; one son, Raymond (Liska) Best, Arlington, Texas; one daughter, Tola Black, Dallas, Texas; two aunts; Fan Hudson and Voleria Watson, both of Mobile, Alabama; three grandchildren; Audrey Nicole Nida Best, Harold Lewis Best and Quentin Taylor Best; three godchildren, Keenan Robinson of Atlanta, GA; LaShanda James of Jackson, MS and Nastassia Ayodele of Gulfport, MS and a host of other relatives and friends. Funeral services for Mrs. Lindsey will be held Thursday, October 16, 2014 at Greater Mt. Olive Baptist Church at 12:00 noon, with visitation one hour prior. The family of Mrs. Essie Mae Lindsey has entrusted her services to the caring staff of Richmond-August Funeral Home.
To order memorial trees or send flowers to the family in memory of Essie Mae Lindsey, please visit our flower store.