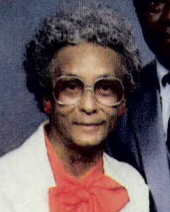 Mrs. Emily Dawson Rogers, age 89, of Gulfport entered into her eternal rest Sunday, January 15, 2012. Mrs. Rogers was born May 15, 1922 in Woodville, MS to the late Mr. Kemp and Rosie Foreman Dawson. She grew up in Indianola, MS and later moved to Gulfport with her family. She met and married her husband, Mr. Isaiah V. Rogers, and had a wonderful life. They adopted one son, Webster D. Rogers. Mrs. Rogers was a devoted member of the Little Rock Missionary Baptist Church. She was an active member of the Deaconess Board and Sunday School Department. Sister Rogers was faithful to her post as the oldest member of the Little Rock Missionary Baptist Church Usher Board until her health began to fail. She also received a certificate of appreciation for her many years of faithful service on August 5, 2007. Affectionately called "Nunskey" she was caretaker for her mother "Mama Rosie", her brother Kemp Jr., and her sister Sarah Hoskins, who all preceded her in death. Also preceding her in eternal rest was her loving husband, Isaiah V. Rogers; their son, Webster D. Rogers; and her father, Mr. Kemp Dawson, Sr. She leaves to cherish her memory a sister, Minnie Johnson; her devoted nieces and nephews who cared for her, Doris Jean Davis, Claudette (Gerald) Woulard, Rosie Johnson, Emile Hoskins, and Robert (Bertha) Hoskins, Jr.; a dedicated niece in whose life she's always played a special role, Dr. Charlestine Fairley of Edgewater, MD; a god daughter, Nichelle Feagin; a special god son, Ryan (Doliria) Hoskins of Jacksonville, FL; and a host of other relatives and friends. The family has entrusted the care of their loved one to the professional staff of RICHMOND-AUGUST FUNERAL HOME.
To order memorial trees or send flowers to the family in memory of Emily D. Rogers, please visit our flower store.
Send a Sympathy Card