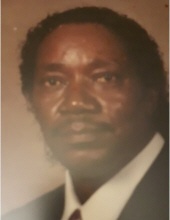 Eligah McCray, 70, resident of Gulfport, MS, passed away February 14, 2016, at his home from a heart attack. He was born in Silvercreek, MS, November 16, 1944, the son of the late Alfred and Arlivia McCray. Eligah was married to Ruby J. McCray. He spent his career as an independent contractor. He loved his family and fishing. Eligah "Buddy" was preceded in death by his parents Alfred and Arlivia McCray; five brothers, Mosses, Leslie, Alfred, Isaiah, and Sammuel McCray; and four sisters, Bee, Catherine, Willie Bee, and Smiley McCray. Buddy is survived by his wife, Ruby McCray; his two daughters, Michelle and Ann; and his play son, David Jr.; his grandchildren, Jessica, Charles, Victoria, Edward, Ray, and Demario. He also left behind eight great grandchildren who he dearly loved, and also a host of nieces and nephews and friends. Funeral services will be held Saturday, February 20, 2016 at 11 a.m. at Mount Bethel Church in Gulfport, MS. RICHMOND-AUGUST FUNERAL HOME has been entrusted with the care of Mr. Eligah McCray. Inquiries: call 228-436-6722.
To order memorial trees or send flowers to the family in memory of Eligah McCray, please visit our flower store.