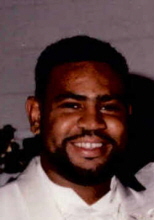 Mr. Eartis Andre Knight, 42, of Lawtell, LA, was born December 17, 1969, in Gulfport, Mississippi, to the late Eartis C. and Bernice Knight of Gulfport, Mississippi. He was united in Holy Matrimony to Mary (Thibodeaux) Knight on November 20, 1993. They were married for 19yrs. He was preceded in death by his parents Eartis C. Knight and Bernice W. Knight, and sister Barbara S. Carney. Andre attended the University of Louisiana, Lafayette where he played collegiate basketball. A loving father and husband, Andre enjoyed making his "girl" laugh and spent plenty of time doing just that. He was also an avid music lover who always made a mix CD that you could "bob" your your head to. Andre worked as a truck driver for many years and enjoyed traveling. Andre went to be with his Lord and Savior on Monday, May 7, 2012. He will be sadly missed, but always remembered by his wife, Mary (Thibodeaux) Knight of Lawtell, LA; three daughters; Chloe Thibodeaux of New Orleans, LA, Ondrea Danielle Knight and Asia Brionne Knight both of Lawtell, LA, three sisters; Deborah Dawson of Dallas, TX; Alandra Knight and Shunda Knight both of Gulfport, MS; three uncles: Arthur James Webster (Doris) and Leon Webster (Mary) both of Montgomery, AL and Curtis Knight (Marguerite) of Gulfport, MS; seven aunts: Emma Jean Cunning of Montgomery, AL; Anna Mae Cook (Robert) and Audrey Conerly of both of Gulfport, MS; Grace Martin (Theodore) of Naples, FL. Sarah Ford of Mount Clemens, MI; Rosie Webster and Calialotta Ledyard both of Montgomery, AL; one sister-in-law: Constance B. Thibodeaux of New Orleans; two brother-in-laws: William G. Thibodeaux (Pamela) of Lawtell, LA and Peter P. Thibodeaux of Atlanta, GA; two nephews: Immanuel Dawson and Donivan Dawson both of Dallas, TX and a host of cousins, relatives, and friends. Funeral services are scheduled for Saturday, May 12, 2012; visitation from 8am till 10:45am with services beginning at 11am at Community Chapel Church of God and Christ 1606 College Ave, Opelousas, LA 70570.
To order memorial trees or send flowers to the family in memory of Eartis Andre Knight, please visit our flower store.
Send a Sympathy Card