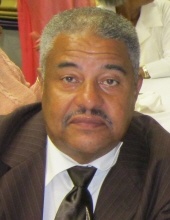 Donald L. Rainey, of Biloxi, born February 11, 1951, went to be with his savior on February 13, 2017. He was a member of that famous Boy Scout Troop 416. Donald graduated from M.F Nichols High School in 1969, where he was an outstanding football player. Afterwards, he lived in Chicago, IL, for many years, where he raised a family. He moved back to Biloxi where he was employed at Keesler Air Force Base and the President Casino. He was preceded in death by a loving mother and father, James and Ruby Rainey; a wife, Billy Jean Forch Rainey; four brothers; and a sister. Donald will be missed by his only child a son, Dwone Rainey; two grandsons, Devin and Brandon; and a special companion, Lillie Snoody; her two children, Frieda Moffett of Gulfport, MS, and Steven Snoddy of Denver, CO. He will truly be remembered by his sisters, Ethel Clay Hozey, Jacqueline (William) Moody, Frances Carter, Thias (James) McGhee, and Theresa Bradley; brothers, Rodney (Lexie) Rainey, Terrance Rainey, and Demontra (Sisily) Rainey; and a host of other relatives and friends. RICHMOND-AUGUST FUNERAL HOME has been entrusted with the care of Mr. Donald L. Rainey.. Inquiries: call 228-436-6722.
To order memorial trees or send flowers to the family in memory of Donald L. Rainey, please visit our flower store.