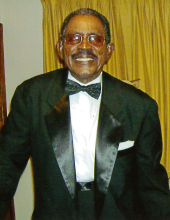 If I can help somebody as I pass along If I can cheer somebody with a word or a song If I can show somebody that he is traveling wrong, Then my living shall not be in vain. This song exemplified the life and the philosophy of Deacon David L. Hall. Deacon David L. Hall, affectionally known to his family and the Soria City community as “Sonny Boy”, husband, daddy, granddaddy, great granddaddy, uncle, cousin, and friend, was born December 6, 1929, to the late Annie Hall and Mr. Joseph Hall in Gulfport, MS, who are now with the Lord, along with three brothers, and four sisters. On January 29, 1951, he united in marriage to Emma D. Magee and to this union was born one child, Gayle Hall Holton of Ocean Springs, MS. At a very early age, he confessed his profession of faith in Christ and united with the Morning Star Missionary Baptist Church under the pastorage of Rev. Ratliff and Rev. Famous McElhaney, where he served with dedication, faithfulness, perseverance, and commitment in various capacities of the church first, as a member for over 80 years, Senior Deacon since 1960, past Sunday School Superintendent, past coordinator of the church food and clothes pantries, past President of Brotherhood, member of District Brotherhood, member of Senior Choir and other various capacities of the church wherever he was needed. He was also a member of Soria City Lodge #542 and served as their Treasurer and Chaplain before his illness. He was employed at Anchor Glass for 25 years and formerly the Pepsi-Cola Bottling Company, now Allen Beverages for 18 years. He exemplified leadership in many aspects of his life and touched the lives of everyone who crossed his path socially and spiritually always saying something about the Lord in his conversations. Cherishing his memories are his loving and devoted wife of 65 years, Mrs. Emma D. Hall; a loving daughter, Gayle Hall Holton (Anthony, a devoted son-in-law) of Ocean Springs, MS; grandchildren, Tameka H. Augustin (Michael) of Pearland, TX, and Anthony W. Holton (TJ) of West Palm Beach, FL; great grandchildren, Nyah and Noah Augustin of Pearland, TX; godchildren, Kimberly B. Fredricks of Gulfport, John Dorsey of Birmingham, AL, and William and Crista Mackey of Ocoee, FL; and a host of nieces, nephews, cousins and friends. Deacon Hall became absent from the body and present with the Lord on Thursday, December 28, 2017, where the Lord said to him, “Well done, my good and faithful servant.” RICHMOND-AUGUST FUNERAL HOME has been entrusted with the care of Mr. David L. Hall. Inquiries: 228-436-6722.
To order memorial trees or send flowers to the family in memory of David L Hall, please visit our flower store.