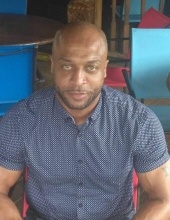 Daniel Lee Dumas, a native of Gautier, Mississippi, was predestined and called home to be with the Lord on July 24, 2021. Daniel Lee was born on January 12, 1981, in Santa Clara County, San Jose California, the youngest of Sidney Lee Dumas and Mae Hettie Leggett. Mae(Pinky) and her 5 children, traveled to her hometown, Waynesboro, MS, from California. Daniel, being the youngest of the siblings, required little if any direction, instruction, or help with preschool work, chores, or other assigned duties. Daniel was a very inquisitive child, having an answer and explanation for everything. During the late 1980s, his mother remarried and relocated to the Mississippi Gulf Coast. In 1987, Daniel Lee Dumas began his academic journey at Gautier Elementary, Middle, and High School, where he excelled scholastically, and socially. During this time, he developed his skills to pursue a football career, landing him the opportunity to try out for the Green Bay Packers. He then went to play semi-pro, for the next 12 years. Daniel accomplished many pursuits. Daniel Lee relocated back to the Gulf Coast in 2012. He then met and married his wife, Shealee Moore, of 6 years. While Daniel loved to pursue football, he began to pursue Christ through ministry. He had a passion for bible study, outreach, witnessing, and telling his testimony. He expressed his love for Christ through writings, poetry reading, rap, recording, and studying the word of God. Daniel shared his love for Christ daily, with family, friends, and even strangers he encountered. Daniel Lee had a pure heart and was mild-mannered. He was loved by many. He impacted people throughout his entire life's journey, from Waynesboro, MS to Gautier, MS, to Starkville, MS, to Kansas City, Kansas, to Fair Bank, Alaska, to Hazlehurst, MS, to Jackson MS, and settling back home in Gautier, MS. Daniel Lee was known for his brilliant mind, great sense of humor, neatness, humbleness, humility and most importantly a man of faith. Through trials, tribulations, and many afflictions, it was no secret that Daniel endured them all. Daniel's favorite song was Eye of The Storm. While he may have faced the storms, he always came through with a smile and a positive word of encouragement for someone else. Daniel often shared the love that he had for his sons. Communicating with Isaiah through a simple text, meant so much. Also, holding conversations with Daniel Jr., Ahiah, and Josh, was the joy of every day. Daniel Lee's passing is not in vain, being predestined and chosen by our Lord and Savior Jesus Christ. Daniel Lee is preceded in death by his grandparents, Reeder Gray and Gladys Gray, Sidney Lee Dumas and Augusta Dumas. He leaves to mourn his loss, his son's Isaiah Blanco, Josh May, Daniel Lee Dumas Jr., Ahiah Dumas, Jordan Dumas his parents: Mae Hettie Leggett, Matthew Leggett, and Sidney Lee Sr. siblings: Micoe Cotton, Christy Frazier, Lashawna Dumas Thomas (Phillip Thomas), Sidney Dumas, Brittney Debose (LaTravis Debose), and Emanuel Leggett (Claidey Mae Gapo-Pardillo Leggett), Erica Dumas, Ann Green, and host of relatives and friends. Funeral services will be held on Saturday, August 7, 2021, at 11:00 am at Infinity Church. Visitation will start at 10:00 am. God Has It from Here Daniel wore many hats throughout his life and in each was authentically himself. He was not perfect, though none of us can claim to be… Daniel was a man of faith if nothing else, and yet he so much more. Regardless of what happened, he would always find his way back to God and rarely had him far from his lips. Daniel could lighten the heaviness of the world for those around him. Despite often battling his own darkness. His humor was unmatched for any who knew him. And he brought a playfulness to life I didn’t know I needed. Daniel’s stories of home, his friends and most especially his family were unending. His love for his home and family radiated with every tale he told. Those who knew him have felt all this passion at some point. And if he knew you, you were never far from his heart. It was approximately 10 years ago Daniel left Kansas to return home to Mississippi. I had seen him but once in those 10 years and spoke only a few times in the same. Regardless of that, the time I knew him it was truly an honor that God allowed me to know Daniel. Despite the years, despite the tears, the world seems lonelier today without Daniel here. I will miss Daniel; I will miss the things that after all this time I still had hoped he’d achieve. I anticipate though that God has it from here because there is no doubt in my mind where his next chapter in his soul’s journey will begin.
To order memorial trees or send flowers to the family in memory of Daniel Lee Dumas, please visit our flower store.