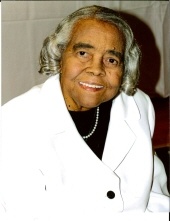 THERE ARE THREE STEPS TO HEAVEN: OUT OF SELF, INTO CHRIST, INTO GLORY Catherine Alberty McIntyre took these first two steps in life and lived a beautiful life in Christ. On Thursday, May 3, 2018, she took the third and final step. Catherine was born October 2, 1921, in Kiln, Mississippi, the second child of Lawrence and Mable Stallworth Alberty. At the age of five, her family relocated from Kiln to Biloxi, Mississippi. She attended Biloxi Colored School, graduating in 1941 as Salutatorian of her class. At an early age, she began a Christian journey at St. Paul Methodist Episcopal Church, when it was located at the corner of Railroad and Elmer Streets. She always put Christ first in her life. As a young child, she learned basic Christian teachings. As a young adult, she began to put these teachings into action. Over the years she served her church in many capacities. She served as Secretary of the Women Society of Christian Service and Commission on Missions; served on the Building Committee for this present structure; served as a Communion Stewardess, Membership Secretary; member of United Methodist Women and the Golden Girls. She was crowned Mrs. St. Paul in 1957; honored as a Loyal Member in 1985, and was the recipient of the Pastor’s Award in 1987. She had a strong commitment to St. Paul and was a happy, loyal, faithful, dedicated member until her health prevented her from doing so. She maintained a Christian home and was a blessing to her family and friends. Catherine married Ernest McIntyre March 1, 1947. They were the proud parents of one daughter, Sherrill. Catherine was secretary for the late Professor Marshall Franklin Nichols; the box office cashier and manager for the Harlem Theatre; a waitress at the Sunrise Café; and retired as a seafood packer from the Biloxi Freezing Company. Catherine was preceded in death by her parents, Lawrence and Mable Stallworth Alberty, two sisters, Helen Alberty Brewer and Emily Alberty Williams, and her husband, Ernest McIntyre. Memories of her life will forever be cherished by her loving and devoted daughter and son-in-law, Sherrill and Rev. Phillip W. Heidelberg; the apple of her eyes, granddaughter Angela; a loving sister Mrs. Geraldine Alberty Brown; a very special cousin, Mrs. Patience Harris, a loving friend, Mrs. Eula Burbridge, and a host of special nieces, nephews, relatives and friends. Catherine leaves a legacy that includes strong love, a giving spirit, family devotion and courage. Obituary written by Catherine McIntyre Services for Mrs. Catherine McIntyre will be held Tuesday, May 8, 2018, at 11:00 am at St. Paul United Methodist Church, Biloxi with visitation one hour before. Richmond-August Funeral Home has been entrusted with the care of Mrs. Catherine McIntrye.
To order memorial trees or send flowers to the family in memory of Catherine Alberty McIntyre, please visit our flower store.