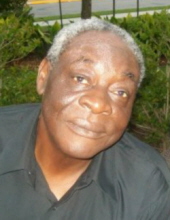 Bobby Lee �Pop� Williams Sr., was born in Pritchard, AL on October 14, 1946 to the late Robert Williams, Sr. and Mary Williams. God called him to his eternal rest May 16, 2012. �Pop� attended Elizabeth H. Keys High School in Ocean Springs; MS. Always a hard worker, �Pop� faithfully labored to care for his wife and companion of 43 years Lucy M. Williams and their six children. �Pop� was passionate about his family and worked tirelessly to ensure they were provided for. He was employed with the City of Biloxi, BFI and later retired after many years at Gulf Pride Enterprises. �Pop� was well known and loved by all he came in contact with. He spent countless days talking with the young men in the community and was a great inspiration to those he met. He will be greatly missed by many. �Pop� will be remembered most sitting on his porch, which was his favorite pastime. He was preceded in death by his brothers, James Williams, Joe Williams, Lonnie T. Williams, Robert L. Williams Jr., and one sister Clotee Stokes, his grandson Lee Demond Smith and two brother-in-laws, Albert Stokes and Curtis B. Smith. He leaves to cherish his memory his loving wife Lucy M. Williams, four daughters, Lashun Smith, Shyri Smith, Shinneta Williams, and Carla Williams, two sons, Bobby L. Williams Jr., and Germaine Williams, four sisters, Gladys (Robert) Battle, Annie L. Smith, Mary E. Williams, and Helen M. Batey; 14 grandchildren, 2 great grandchildren and a host of nieces, nephews, other relatives, and friends. Services will be held Saturday, May 26, 2012 at 12:00 noon at Greater Grace Apostolic Assembly in Biloxi with visitation at 11:00am. The family of Mr. Bobby Lee Williams has entrusted his arrangements to the caring professionalism of RICHMOND-AUGUST FUNERAL HOME.
To order memorial trees or send flowers to the family in memory of Bobby Lee "Pop" Williams, please visit our flower store.
Send a Sympathy Card