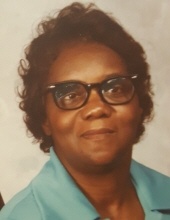 Bernice Walton was born on May 12th, 1926 in Union, MS to Sol Bailey & Alma Bailey. She passed away peacefully on September 24th, 2016 in Federal Way, WA. She went to be with the Lord at the blessed age of 90 years old. Early in life Bernice moved to Gulfport, MS where she resided for many years. She then moved to Seattle, WA 10 years ago after hurricane Katrina and was looked after by her daughters Blany and Mary Lois. Bernice is remembered by her only surviving sister Dorothy James. Preceded in death by her siblings Edward Bailey, Essie J. Bailey, Jewel Bailey, Selby Bailey, and Winnie Butler. Bernice is preceded in death by her late husband Robert Walton of 20+ years of marriage. Together they had several children and stepchildren. She is survived by children: Blany Bridges and Mary Lois Davis of Seattle, WA and Charles Lindsey of Gulfport, MS. Her stepchildren: Betty Moore of Seattle, WA, Katherine Reed of Jackson, MS, Rosalee Walton of Gulfport, MS. Preceded by Walter (Sonny) Lindsey, Fred Lindsey, W G Lindsey, and Floyd Lindsey. She will also be remembered by a host of grand children, great grandchildren, and great-great grandchildren. As well as a host of nieces, nephews, family and friends. Bernice enjoyed fishing, attending church, and growing beautiful flowers. She also had a passion for cooking. Her home was always open for Sunday dinners to anyone who wanted to eat. The care of Mrs. Bernice Walton has been entrusted to RICHMOND-AUGUST FUNERAL HOME. Inquiries: 228-436-6722.
To order memorial trees or send flowers to the family in memory of Bernice Walton, please visit our flower store.
Send a Sympathy Card
Send a Sympathy Gift