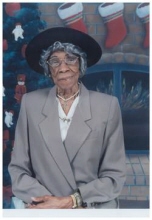 Mrs. Annie Mae Forrest, 101, a resident of Gulfport, passed away on January 12, 2014 at Seven Hills Health and Rehab Center in Tallahassee, FL. Annie Mae Forrest was born in Kentwood, LA, on January 16, 1912, the Daughter of John Holden and Sally Mae Holden. Mrs. Annie Mae�s birth father died while she was still an infant, and her mother eventually married Deacon Edgar McNeil, who adopted and loved Annie Mae as his own daughter. Annie Mae received Christ at an early age during a revival, and spent the rest of her life as a devoted servant of The Lord. Annie Mae was married to Deacon Sam Forrest, and they settled in the Hansboro community of Gulfport, where they enjoyed a wonderful life together until his death in 1968. Mrs. Annie Mae spent her early life as a migrant worker in Turpentine camps in Mississippi and Alabama, and later worked in the hotel industry along the Mississippi Gulf Coast. She was also employed as a school cafeteria worker before her retirement. Mrs. Annie Mae was a faithful member of New Jerusalem Baptist Church in Gulfport, and enjoyed visiting with church members, neighbors, friends, and relatives, before her health began to decline in 2011. She spent her final years in Tallahassee with her great-nephew and his family, where she quickly made new friends in the Tallahassee community. Mrs. Annie is survived by her great nephew, Kenneth (Yvette) Tellis and their children, James and Kristen, all of Tallahassee, FL; her niece Bertha M. Cochran; other great nephews and great nieces, Gloria (Charles) Manning, Donald Cochran, James W. Cochran Jr., Catherine Latimore, Jessica (Chester) Blackmon, Marie Cochran-Duplessis, and Gerald Cochran, all of Ocean Springs; Ronald (Jackie) Jones of Atlanta, GA , Darryl Jones of Tuskegee, AL; and a host of other relatives and friends. Funeral services for Annie Mae Forrest will be held Saturday January 18, 2014 at 11 a.m. at New Jerusalem Baptist Church in Gulfport. The family of Mrs. Annie Mae Forrest has entrusted her care to the professional staff of Richmond-August Funeral Home.
To order memorial trees or send flowers to the family in memory of Annie Mae Forrest, please visit our flower store.
Send a Sympathy Card