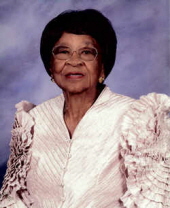 Mrs. Anglein Bailey was born August 4, 1922 in Tallullah, LA to Nelson and Virgie Munford. A longtime resident of Biloxi, Anglein spent her childhood in Vicksburg, MS before moving to the Coast. She enjoyed being outdoors, fishing, picking up pecans, going to the farmers market, and spending time with friends and family. Anglein was active and involved in her community. She was a member of Main Street Missionary Baptist Church for over 50 years where she served on the Mother�s Board and sang in the Senior�s Choir. She was also a member of The Good Neighbors Club, The Widows Club, and an honorary member of Gulf Coast Temple. Anglein was employed at the Biloxi Yacht Club and the Keesler Officers� Club. She also worked as a midwife and cared for children in her home. A caring person, she enjoyed helping others. After retirement, Anglein spent her spare time volunteering at the Salvation Army, East Howard Avenue Baptist Church, and Twelve Baskets. She was a mother, grandmother, and friend to many. Mrs. Anglein Bailey entered into her eternal rest Sunday, September 11, 2011. She will be truly missed. Anglein was preceded in death by her husband, Leonard "Bud" Bailey; son, Bobby Lee Bailey; parents, Virgie and Nelson Munford, Sr.; three sisters, Nellie Adams, Vurneal Reeves, and Rosie Bell Lonberger; two brothers, Nelson Munford, Jr. and Harry Munford; and two grandchildren. She leaves to cherish her memory, six daughters, Nell (Emmit) Davis of Gulfport, MS; Diane (Sam) Kinzer of Biloxi, MS, Glory (Marlyn) Fields of Biloxi, MS, Julia Annette (Nathaniel)Washington of Byrum, MS; Gladden Frink of Atlanta, GA, Florence(Patrick) Hart of Mary Ester, FL; one son, Robert(Hellen)Simpson, Sr. of Ocean Springs, MS; one sister, Carrie Bryant of Vallejo, CA; and a brother-in-law Roy Adams of Biloxi, MS; 11 grandchildren; 16 great grand children; and a host of nieces, nephews, other family and friends. Funeral services will be held Thursday, September 15th at Main Street Missionary Baptist Church, Biloxi. Visitation from 10 - 11, with services beginning at 11am. Those unable to attend in person may view the service live @ www.richmondaugustfh.com by clicking the live video tab. The family has entrusted the care of their loved one to the caring professionalism of RICHMOND-AUGUST FUNERAL HOME. (228) 436-6722
To order memorial trees or send flowers to the family in memory of Anglein Munford Bailey, please visit our flower store.
Send a Sympathy Card