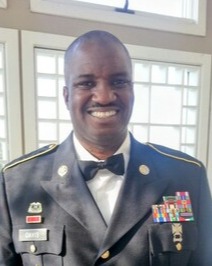 He departed this life on January 12, 2023. He was a loving husband, father, grandfather, and uncle, hewill be remembered for the many lives he touched.

Lonnie “Junior,” as he was often referred to, graduated from Biloxi High School. He was a proud American soldier, enlisting in the United States Army, serving his country for 28 years, and retiring from active service on June 7, 2017.

Alonzo enjoyed his football “Dallas Cowboys,” grilling, and good music. Alonzo would give sound advice that needed his help. He loved mentoring and was a great mentor. He was honored to be an actively serving member of the Omega Psi Phi Fraternity Ocala, Florida, Chapterand the historic Second Liners of Biloxi, Mississippi. But more importantly, Alonzo was a child of God.

He was preceeded in death by his parents Alonzo Davis Sr. (Bettye Davis) and Shirley Jacob Gibson (William “Bill” Gibson)

To order memorial trees or send flowers to the family in memory of Alonzo Davis, Jr., please visit our flower store.